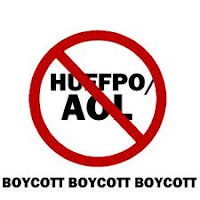 I must admit I liked the slightly larger following I got from posting at Huffington and I will miss the interaction I had with many new friends who read my stuff and left comments of their own. I'm also generally a fan of the new media and the somewhat (more on that later) greater freedom it offers for critical writers like myself. I have long given up relying on the analog media which has made itself obsolete and has put thousands of skilled journalists out on the street.

All this being said, my parents didn't raise no scab. Even though my Guild membership expired years ago,  I don't cross picket lines, real or virtual. Problem with this one (or with me) is that I didn't know about it until I heard something at the Netroots Nation meeting last week and then read this piece by Mike Elk from ITT.


In response to what labor leaders see as an exploitative situation, on March 17, the Newspaper Guild (TNG) and the National Writers Union (NWU) both called for bloggers to refuse to blog at the Huffington Post and join an electronic picket line against the publication. The unions are demanding that a pay schedule be established for compensation of all unpaid Huffington Post bloggers and that those bloggers be given greater editorial control over how their pieces are used. -- In These Times

I may be a little slow these days, but I'm still there.


###
Now, so much for greater freedom:  I'm  fuming over Huffington's apparent censorship of a piece I wrote several weeks ago, about social-Darwinism and corporate school reform. It wasn't published and I never even heard a word back from Huffington editors telling me why.  Here it is, in full. You tell me why there's was no room at Huff for this point of view?

So when critics complain to me that we (charters and college-access nonprofits) are "creaming" the best African American and Latino students, the students who would have gone to college without us, my only retort is "So what?" -- Robert Schwartz

Robert Schwartz's post on the Huffington Post, "Why Charters and College Access Programs Should Cream," is but the latest incarnation of Social Darwinism applied to current public education policy. Such theories were popular in the late Victorian era in England, America, and elsewhere.

Social Darwinism has little to do with the actual theories of Charles Darwin. Rather it's basic premise was -- and still is -- that the strongest or fittest should survive and flourish in society, while the rest -- well, not. Its conceptual core comes from a somewhat distorted interpretation of Herbert Spencer, whose ethical philosophies were grounded in an elitist worldview and received a boost from the application of Darwinian ideas such as adaptation and natural selection. It was Spencer who actually coined the term "survival of the fittest." While his fight in defense of science against the theological systems of the Middle Ages was progressive in his day, Spencer's theories also contribute to today's reliance upon standardized testing as the measure of learning.

Indeed, in its most extreme form, Social Darwinism was used to justify eugenics programs aimed at weeding "undesirable" genes from the population. While we usually associate such theories with Nazi Germany, we have always had our home-grown versions within U.S. academia and politics.

President Obama, while on the campaign trail in 2007, was a vocal critic of Social Darwinism as practiced by the Bush administration's Ownership Society approach to economic and tax policies, including the removal of social safety nets for those citizens most in need. But you don't hear much on that topic from him these days, especially when it comes to school reform policies. After all, what is Race To The Top except a refined form of survival of the fittest?

Robert Schwartz calls on corporate America to further bankroll privately-run charter schools like KIPP and ICEF as elite schools for those students with "high potential," while relegating traditional public schools to "focus on what they've already been doing for the past decade" -- moving those with lesser potential "from below basic to proficiency."


"You see," writes Schwartz, "our urban and rural schools have been doing better at educating lower achieving African American and Latino students in their attempt to close the achievement gap."

Schwartz, a Teach For America (TFA) alum -- no shock there-- directs the so-called Level Playing Field Institute. He actually performs a service here, by articulating the anti-democratic social theory behind many current corporate-backed school reform policies. However, his plea to U.S. corporations to increase their support for school re-segregation and creaming via charter schools is redundant. The corporate world, including power philanthropists like Gates, Broad, Walton and Bradley, is way ahead of him in this regard. It was the Bradley Foundation, in fact, that underwrote the publication of The Bell Curve, by Charles Murray and Richard Herrnstein, which was based on the Social Darwinist theory that black and Latino students lacked the academic potential held by white and Asian students, and therefore should be tracked away from college preparatory programs.

Schwartz knows from where he speaks. Until recently, he was Chief Academic Officer for Inner City Education Foundation Public Schools (ICEF) in South Los Angeles. He claims to have led "the strategic expansion of the academic program from three schools with 500 students to 15 schools with almost 4,000 students."

I couldn't help but notice this recent news story about ICEF, where the survival-of-the-fittest theory plays itself out in practice. It seems that after years of financial mismanagement, ICEF has crashed, leading to a lock-out of hundreds of students at their Lou Dantzler Preparatory Charter Middle School. According to ABC News, "The Inner City Education Foundation (ICEF) that runs the charter school and leases space from the Boys and Girls Club was having problems paying its bills."

So it seems that even for the chosen few with "high potential," Social-Darwinian theories don't necessarily deliver the goods and their promised "level playing field" is not so level after all. Buyer beware!
Follow Mike Klonsky on Twitter: www.twitter.com/mikeklonsky
Posted by Mike Klonsky at 1:26 PM