Rahm does his best Ronald Reagan

"Not to quote Ronald Reagan, but I will: 'The facts are a stubborn thing,' " Emanuel said. 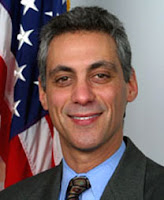 If there was any doubt that the mayor is itching for a union-busting showdown with Chicago teachers, he's made it perfectly clear by invoking an old hero -- Ronald Reagan. Emanuel's corporate handlers over at the Civic Committee have assured him that blaming rich, greedy teachers for the budget crisis and going after teachers pay, tenure, and pensions is a political winner.

They even had him quoting Reagan yesterday, conjuring up images of the great communicator busting the PATCO strike in 1981 and firing over 11,000 workers to the cheers of strike-weary air travelers. But this may have been a mistake at a time when Democrats need to stem the rise in joblessness.

Rahm and the corporate school reformers see the current crisis as their big chance to do nothing less than bust the teachers union the same way that Reagan busted PATCO. Only this time they are counting on the acquiescence of the union leadership to avoid another Wisconsin-type battle. Fresh off their victory with the passage of SB7, the reformers got the school board to block Chicago teachers' scheduled 4% pay raise.

Demagogue Rahm defended the salary cut, claiming "that three out of four Chicago Public Schools teachers will get other types of raises even without the 4 percent increase." So much for facts being stubborn. The point here wasn't that Rahm wanted to save the budget-conscious school board some money. Rather, he wanted to nullify the whole collective bargaining process which produced the raise. In essence, Rahm and the reformers are pursuing the same strategy as the Tea Party govs in Wisconsin, Ohio, Florida, Indiana and Michigan. The only difference is in tactics. They want to do it to the workers. Rahm wants to do it to the workers, with their collaboration.

But they may have overplayed their hand this time. This isn't 1981. Now they've pushed the CTU leadership's backs to the wall. This is a leadership that won the last union election by promising to lead a fight- back while attacking the conciliatory approach of the old union leadership. Now they have to stand up and fight or lose credibility. It's not just the promised pay raise but for the very future of their union that's at stake.

"Mayor Rahm Emanuel clearly threw down the gauntlet today, as his new Board of Education unanimously voted not to pay scheduled 4% raises for members of the Chicago Teachers Union. Now the question is, what will the CTU do about it? Union chief Karen Lewis has used lots of angry rhetoric lately, but she has only a few days to make a really heavy decision: Whether to accept the cut or use it as a legal device to reopen negotiations on the now somewhat obsolete contract with Chicago Public Schools."

Even though SB7 has weakened the union's ability to organize a strike by requiring 75% of union members to vote for one as well as requiring a long mediation period, this all could still work in teachers' favor by allowing the union time to organize. It could also help build support from other public employee unions, like the cops' and fire fighters'.  It sounds like Karen Lewis and her troops have decided to go beyond the rhetoric. She went on TV last night and warned:


“We could easily strike because of this.” The teachers union president correctly blamed the school board for a possible strike by teachers stating “we are still shocked that the board would take an action that could possibly lead to a strike…”

Even the threat of a strike, blue flu, and job actions by public employees as we head towards the 2012 elections, could well wipe that shit-eating grin off of the mayor's face.