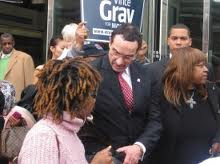 As predicted, D.C. Mayor Adrian Fenty took a pounding from voters in yesterday's primary election, losing to Vincent Gray who received 53% of the vote to Fenty's 46%.

The vote was as much a rejection of Michelle Rhee's top-down, divisive, anti-teacher school-reform as it was of Fenty himself. It came despite frantic, last-minute campaigning from none other than the Sec. of Ed. Arne Duncan who has spent an inordinate amount of time recently, visiting schools with Rhee and Fenty, handing out obviously politically-motivated awards and grants, looking for photo ops and badly overstating the results of the Rhee reforms.

On the eve of the election Duncan told the press that "by any measure, by every measure, D.C. has made real and substantive progress" even though District schools saw math and reading scores drop in the last year--the very measures that Duncan and Rhee have put at the center of their reform.

But voters weren't buying Duncan's pitch and as a result, the vote represents an embarrassing defeat for Obama and Duncan and a rejection of their own Race To The Top. It should be noted that the president himself never endorsed Fenty and passed up several opportunities to speak out on the mayor's behalf despite Fenty's desperate plea for help.

Rhee's reform was also propped up with millions of dollars from power philanthropists like Walton and Broad who threatened to pull $75 million in foundation funding should Fenty lose the election. Pro-charter, pro-voucher, and anti-union groups like Democrats for Education Reform (DFER) also rallied behind Fenty and an anti-union film bashing the teacher unions and touting Rhee, Waiting for Superman, was released just before the election.

Fenty's only pockets of support were found n predominantly white, wealthier parts of the district where fewer voters send their children to public school. It was in the black precincts where Fenty really took a pounding. Gray even beat Fenty in his home precinct in Crestwood with 56 percent of the vote. According the Post,


...despite the mayor's frenetic, expensive efforts to promote his accomplishments in all eight wards, he was unable to reverse the widespread belief among black Washingtonians that he favored residents of predominantly white, wealthier neighborhoods.

Gray did not directly address Rhee's future, saying only:


"Make no mistake -- school reform will move forward in a Gray administration. And it will be done in a holistic way, with a strong, empowered chancellor who works with parents and teachers."