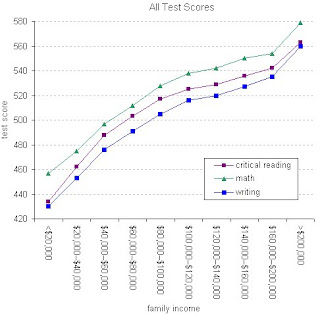 Another year, another study

Yes, despite what you may have heard from the "no excuses" crowd, SAT scores once again correlate perfectly with parents' tax returns. According to Catherine Rampell at NYT's Economix blog, the correlation remains strong again this year.

I'll leave it to the reader to look at this data and figure out the long-term impact of Duncan's dictum that teachers be paid on the basis of these test scores.

Of course, as any over-educated Harvard business prof (with bathrooms on his mind?) will be quick to argue, the data doesn't prove a causal relationship between income and test-scores.

Suppose we were to graph average SAT scores by the number of bathrooms a student has in his or her family home. That curve would also likely slope upward.

But as Rampell points out:

There’s a very strong positive correlation between income and test scores. (For the math geeks out there, the R2 for each test average/income range chart is about 0.95.)