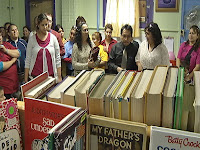 "We're here, and we're going to stay here until we get the library the way we want it,'' Pilsen resident Evelin Santos said of the Whittier School field house that officials call a safety hazard. "If we have to, we are going to stay through the winter.'' (Sun-Times)

Does Chicago need another king?

We've become accustomed to the mayor's taking over parts of government that are supposed to be independent, like the School Board and the Housing Authority and the Park District, and then running them according to his idiosyncratic lights, which notably feature a disdain for public schooling and housing and for the legal covenant keeping the lakefront "forever open, clear and free."  --Kelly Kleiman, Huffington

Looking back at the Little Village hunger strike

Few efforts to oppose Daley have worked during his 21 year reign. A notable exception is the 2001 Mothers' Day sit-in in Chicago's Little Village neighborhood, another predominantly Latino neighborhood west of Pilsen. The mothers went on a hunger strike for 19 days to get a new high school for the community. Little Village Lawndale High School Campus opened four years later, a testament to the people power that survives even under Daley.--Julie Woestehoff, Huffington

The smarter tactic is to build excitement rather than sow discord. For example, Obama has made a concerted effort recently to reach out to young people, and that appears to be paying off. According to a Gallup poll released on Friday, the Democratic advantage in the Congressional races among young voters jumped 10 percentage points from last month, producing the “widest generational gaps so far this year.”--Charles Blow, NYT