Gates: "What I've learned about great teachers" --Nothing! 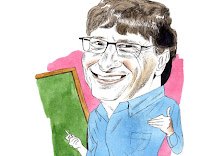 Bill Gates shows he's still a pompous ass and an educational know-nothing in this Parade Magazine interview with Paul Tough. From the headline, "What I've leaned about Great Teachers" (he never tells us) you'd expect Gates to be somewhat contrite and a little less assuming.  But he can't help himself. He loves to draw big conclusions based on little or no evidence and make big negative public pronouncements about how terrible teachers and public schools are. Remember when he he pitched small schools as the single panacea for public education (we told him it wasn't so). Then he flipped, announced about those same schools, that U.S. high schools were obsolete and not worth reforming at all. Now he's back on the offensive with more billion-dollar panaceas, only this time with a broad-brush attack on teachers and the teaching profession.


"In almost every area of human endeavor, the practice improves over time," says Microsoft co-founder Bill Gates. "That hasn't been the case for teaching."

Shame on Randi Weingarten for having Gates as the AFT's keynote convention speaker leaving no chance for her own members to respond or even ask questions. Here he returns the favor with more teacher bashing and snarky remarks about Randi herself.
Posted by Mike Klonsky at 7:11 AM