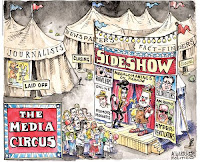 Wapo's Valerie Strauss has the best review of Education Nation, which she says, "didn't even come close" to fulfilling NBC News President Steve Capus' promise that the show would be a fair, serious look at public education today.

The Greatest Show on Earth Part2--Strauss says that CBS and a ga-ga Katie Couric are now planning their own series of reports on education.


Education, the subject that people have long said was super-important but that never got much coverage, is suddenly huge news. The question is why it is not being examined with the same skeptical view that, say, Obama’s health care proposal was.

Email ThisBlogThis!Share to TwitterShare to FacebookShare to Pinterest
Labels: media