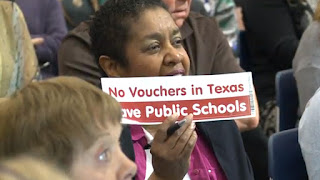 Trump's Ed Secretary Betsy DeVos is determined to use the Dept. of Education's federal grant program as a weapon against public education. DeVos' stated number-one priority for the program is to “maximize” “educational choice". This means taking billions of dollars away from public school classrooms to promote school vouchers and privately run charters.

States that adopt her program, will be heavily rewarded, while those that don't will be punished. I should note that Obama's former Ed Secs, Arne Duncan and John King also used their $5B grant program to push charters and punish states that wouldn't adopt their failed "Race to the Top" program which included massive school closings and teacher firings. But DeVos' plan is Duncan squared with vouchers and "scholarships" for private schools put at the top of the list.

DeVos' Proposed Supplemental Priorities and Definitions for Discretionary Grant Programs has been met with loud opposition from a coalition of 50 school, community and civil rights organizations. The National Coalition for Public Education which includes both national teachers' unions, AASA: The School Superintendents Association, the National PTA, disability rights groups, the NAACP, and others is dead set against DeVos's priorities.

Their statement reads in part:


The Department should not reward states for adopting voucher programs that do not serve all students, fail to improve academic achievement, undermine public education funding, harm religious freedom and lack critical accountability for taxpayers. Instead, the Department of Education’s first priority should be funding, supporting, and strengthening our public schools, where 90% of our students attend.

It's a strong statement on vouchers, but unfortunately makes no mention of privately-run charter schools, the second leg of the destructive, right-wing Trump/DeVos "choice" initiative. While some groups within the coalition, like the NAACP, have been highly critical of charters, others haven't. So I'm assuming that the anti-voucher statement was the best possible without splitting the group.

In any regard, I doubt that DeVos (if she remains in power) will pay much attention to the statement unless it is backed up with protests in the streets and at schools.

Side note on charters...

Charter school operators who stand to gain from Trump/DeVos initiatives as well as from the biggest private foundations, have put their stamp of approval on DeVos' "choice" priorities. However, they do have one small criticism. They want the word "quality" put in front of "charter schools".

Quality is NACSA code language to signify that only the largest and richest charter school chains get the grants and that small, teacher-run, unionized, or "mom & pops" charters are eliminated.
Posted by Mike Klonsky at 6:39 AM