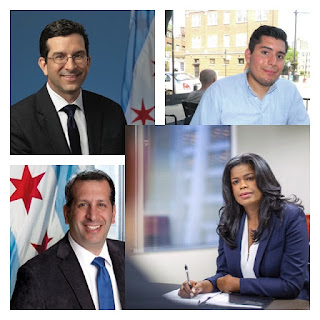 We're taking the day off to recover from last night's turkey fest. But if you missed last week's show with in-studio guest Fritz Kaegi, it's re-running this morning at 11 a.m. CT on WLPN FM 105.5 in Chicago, streaming wherever you are at www.lumpenradio.com.  We will return to the airwaves next Friday, Dec. 1st, same time, same station.

Local holiday thanks go out to...
State's Attorney Kim Foxx whose first year uin office ended on a high note, including the release of two black men serving life sentences for a 1994 rape and murder, set free based on DNA evidence that links the crime to another suspect. In other words, Nevest Coleman and Derrell Fulton, doing life life in prison, were obviously framed for the 1994 murder of Antwinica Bridgeman and served 23 years when a fresh round of DNA testing this spring showed semen stains on Bridgeman's clothing matched a serial rapist.

Foxx should credited with the release of Jose Maysonet, and Arthur Brown, who have served 29 years after being falsely convicted and the exoneration of 15 men, en masse, who had 18 convictions between them - all tainted by crooked cop Ronald Watts and his officers who terrorized residents of the Ida B. Wells public housing complex for years before they were caught by federal agents.

Thanks also to Alds. Scott Waguespack (32nd), Carlos Ramirez-Rosa (35th), and John Arena (45th) the only three aldermen who had spine enough to stand up to "Mayor 1%", Rahm Emanuel and vote no on his budget.


Ald. Ramirez-Rosa: "It is time we demand that the rich and wealthy elite of this city pay their fair share. We can and should reinstate the corporate head tax, enact substantive TIF reform, implement a commercial lease tax, and create a municipal bank."

Ald. Waguespack: And yet, again through this year's budget, the Emanuel administration adds to the load of regressive fines, fees and taxes that working families must bear. We cannot in good conscience vote to advance this irresponsible approach." .

And thanks in advance to groper/assaulter, Al Franken, for voluntarily stepping aside and allowing MN Gov. Mark Dayton to replace you with another Democrat, hopefully a woman or even a real progressive like Keith Ellison. Yes thank you for saving the party from humiliating defeats in 2018 and allowing fellow Dems to speak out on women's issues in Congress without being rightfully  ridiculed.

In case you need more reasons, consider recent polls and let me remind you of the fact that you used your super-delegate vote at the 2016 convention in Philly to override the votes and voices of Minnesotans who wanted Bernie Sanders as their candidate.

Thanks and don't let the door hit you on the way out.


I think Democrats have underestimated how seriously voters are taking the Franken allegations and how hypocritical it makes them look. https://t.co/fw3xSIz59G
— Nate Silver (@NateSilver538) November 22, 2017