Luis steps down. I'm good with it. Stirs the political pot in Chicago. 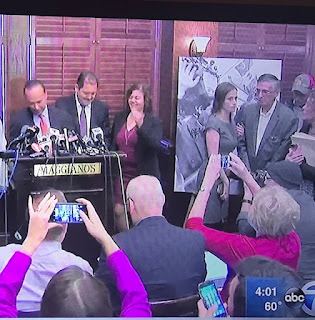 Normally, I would take the news that a progressive Democrat was leaving congress, as a bad thing. But I didn't take Cong. Luis Gutiérrez' announcement that way. On the contrary, I think his announcement yesterday that he won't run again in 2018 and his endorsement of Chuy Garcia in the primary, is good news.

For one thing, Gutiérrez will be easily replaced by another Democrat as part of the anti-Trump wave in 2018. For another, the announcement disrupts the current political inertia on the part of progressives in a good way. Already, potential candidates, including Garcia, Ald. Carlos Rosa, Ald. Joe Moreno and others, are mobilizing their supporters to go out, knock on doors, gather signatures and speak to the issues that Gutiérrez championed. These include: Trump's impeachment, immigration rights (including several arrests for acts of civil disobedience); defense of the Dream Act and support for DACA students, Puerto Rico's post-hurricane rebuilding, maintaining Chicago as a sanctuary city and many others.

I also think Gutiérrez can be much more effective in the years to come, working on these issues outside of congress. Twenty-four years should be enough for anyone.

While some on the left are bemoaning the idea of a primary race among progressives, I think it will generate a lot of excitement and should improve voter turnout and increase votes for progressive candidates up and down the ballot. Dan Biss and Fritz Kaegi, among others, should be smiling this morning.

I was also impressed that Luis and Chuy, who were close allies back in the Harold Washington days, were able to come together and set aside recent differences. Remember, Gutiérrez supported Rahm Emanuel over Garcia in the last mayor's race. I assume that Rahm's sticking to his support for Sanctuary Cities is part of the return on the deal. Luis' endorsement of Chuy should also help rebuild bridges between the city's Mexican and Puerto Rican communities.

More possibilities open up, including Progressive Caucus Ald. Rick Munoz replacing Chuy on the County Board and some younger progressive (I hope) replacing Rick in the 22nd Ward and on the City Council.

Some pundits, like Politico's Natasha Korecki, claim that this is part of a deal brokered by Rahm, to pull Chuy out of the next mayor's race, thereby "clearing the path" towards Rahm's re-election. But that doesn't seem plausible to me. First of all, I don't believe Chuy would have been part of such a deal with Rahm. Second, I'm not convinced Chuy had any serious intention to run again for mayor. Third, I'm not sure that Chuy, despite having, against all odds, forced the mayor into a runoff last time around, had much chance of defeating him this time. Having said this, I still don't agree that the mayor can't be beaten in 2019 by any one of a number of other candidates. Certainly no "clear path" as Korecki claims.

Brother Fred and I will be discussing these issues and more with Friday's guest on Hitting Left, veteran Chicago media and political consultant Delmarie Cobb. Tune in Friday at 11 a.m. CT on www.lumpenradio.com or download the podcast  at iTunes.
Posted by Mike Klonsky at 9:21 AM