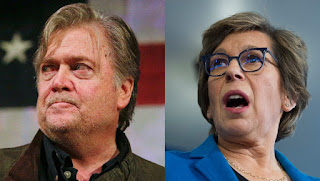 The meeting was set up by right-wing media mogul and Trump ally, Chris Ruddy, chief executive of Newsmax Media Inc. who, according to the Post, "is a friend of both Trump and Weingarten". Ruddy approached Weingarten about the secret meeting because Trump “likes her” and supported opening a conversation to see whether there was common ground", says Ruddy.


The idea for a conversation between the White House and Weingarten developed, Ruddy said, when he was talking to the president about education and mentioned he knew Weingarten. Trump also knew her — both were prominent figures in New York in their own fields.

“The president knows her and likes her,” Ruddy said. “He obviously knows her from the New York world. . . . So I mentioned this to the president as an opening to communications with her. Steve [Bannon] was excited about that. I set up a meeting and they had a private meeting outside the White House.”

Actually, Trump's rationale for the meeting is much clearer than Weingarten's. Trump had already been successful in driving a wedge in the labor movement through meetings with Teamsters President Jim Hoffa and AFL-CIO President Richard Trumka. Each applauded Trump for pulling out of the Trans-Pacific Partnership and threatening other international trade agreements. Trumka even took a seat on Trump's manufacturing council (which never met) and supported Trump's plan to build the oil pipeline through the Standing Rock reservation in North Dakota.

Also, around the same time as the Bannon/Weingarten meeting, Chicago Mayor Rahm Emanuel was holding his own closed-door meeting with Education Secretary Betsy DeVos. Nobody knows what went on behind those doors. But within weeks, a voucher bill was passed in IL by a majority Democratic legislature, without any resistance from Emanuel.

Weingarten however, offers no strategic or tactical rationale for her consenting to hold the secret (from her own membership) meeting. When she tries, she sounds like someone who has drunk the  populist kool-aid.


She says, she thought Bannon sought the meeting [she thought? m.k.] because he believed there was common ground; she and her union have been critical of the power of hedge fund managers and “crony capitalists,” as has Bannon.


No, no, no. Not true... Bannon's rise to power has been largely underwritten by hedge funders and crony capitalists like billionaire Robert Mercer, a long-time Trump crony who up until this week ran Renaissance Technologies and it's crown jewel, the Medallion Fund, which, according to Bloomberg, is perhaps the world's greatest money-making machine. Medallion is open only to Renaissance's roughly 300 employees, about 90 of whom are Ph.D.s, as well as a select few individuals with deep-rooted connections to the firm. The fabled fund, known for its intense secrecy, has produced about $55 billion in profit over the last 28 years.


“Look, I will meet with virtually anyone to make our case, and particularly in that moment, I was very, very concerned about the budget that would decimate public education,” Weingarten said. “I wanted it to be a real meeting, I didn’t want it to be a photo-op, so I insisted that the meeting didn’t happen at the White House.”

Weingarten didn’t take notes at the meeting, which was held at a Washington restaurant, but told The Intercept she and Bannon talked about “education, infrastructure, immigrants, bigotry and hate, budget cuts … [and] about a lot of different things.”

Her takeaway: Bannon is no Martin Luther King. Really?


The [Martin Luther] King philosophy of jobs and justice is not the Bannon philosophy, let’s put it that way.”

But on the other hand, she did buy some of his faux working-class populism.


“I think he sees the world as working people versus elites. And on some level, he’s thought about educators as working-class folks."

Lots of questions here... Why did it take seven months for this meeting to be revealed, and only then by a Bannon friend? Why, with the AFT and the labor movement in general in a state of crisis, bleeding members and money, would Weingarten look to Bannon for common ground?

I'm not saying or implying that Weingarten cut a back-room deal with Bannon. I'm not sure that either of them had the power to make any kind of deal. I think this was more of a feel-out meeting that was intended to be kept secret on all sides.

Weingarten and the union leadership seem lost at sea with no real sense of direction. She has nothing to deal. Her first instinct seems to be to scramble for her own personal seat at the table. Or as she puts it...


“If you are the president of the union and you’re fighting fiercely to get budget restorations and to not have a dismantlement of public education or of higher education and the administration asks to – or it’s made clear to you that they want to meet – you meet,” she said. “You don’t not meet. You meet.”

At the same time she was secretly not not meeting with Bannon, she was also asking DeVos to do joint school tours with her. This even while DeVos was being picketed by parents and teachers at local public schools.

But her meetings with Bannon and DeVos did nothing to get adequate funding for public ed. Since the meetings, the federal public school budget has been slashed to pieces and billions of dollars shifted over from public schools to privately-run charters and school vouchers.


Hearing Bannon attack elites, including the types of hedge fund Democrats who fund the charter school movement, in the same way she would, was surreal. “He hates crony capitalism,” Weingarten said. “The same kinds of things [we say], you could hear out of his mouth, and that’s why it’s so — you sit there in a surreal way, saying, ‘How can you sit right next to all these elites?'

That would be a great question for Weingarten herself to answer.

No, this is not a time for secret meetings with fascist demagogues. It is a time for organizing and mobilizing rank-and-file resistance.