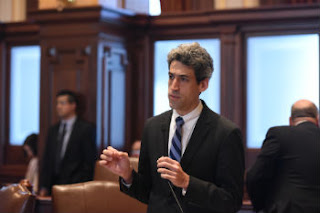 Our in-studio guest tomorrow on Hitting Left will be IL State Senator Daniel Biss. He's the second Democrat in the upcoming race for governor, after Ald. Ameya Pawar, to appear on the show. Between us and John Daley's show on Lumpen Radio, we should be able to cover the waterfront.

Brother Fred and I are still searching to find any real distinctions among the candidates in the Democratic primary besides the size of their war chests. That's a big issue for some (not me) and probably the reason for so much early labor support swinging billionaire candidate J.B. Pritzker's way. He will have no problem matching billionaire Rauner dollar-for-dollar in what will be the most expensive governor's race in history.

Biss should have no trouble raising money, mainly from his liberal north-shore base and political PACs and, at least in my humble opinion, could defeat Rauner in a head-to-head election if he can expand his support base beyond liberal white suburban voters.

Mini-Trump Rauner's got all the money in the world but his numbers are miserable, as well they should be. His approval rating now stands at 34% and sinking like a stone. Polling this week shows him trailing 37% to 49% against a "generic Democrat" in the 2018 gubernatorial election. His support among Republicans is tepid, at 68% with only a handful who think he's doing a great job. His veto this week, of the education funding bill, should knock him down even further.


“Chicago’s is the only public school district in Illinois that does not have an elected school board. It’s time that we bring basic democracy to the state’s largest school district. I look forward to supporting this measure when it comes over to the Senate from the House.” -- State Sen. Daniel Biss

And "generic" Democrats seem to be all we've got to choose from in 2018. That in itself is pretty sad given how strong Bernie Sanders ran in the state's presidential primary against Hillary Clinton. He got a million votes and lost to Hillary by only 2 percentage points.

You therefore would think that independent party politics would be a major factor in the gov's race. You would be wrong. Dem leaders fear a divisive challenge from the left more than they do Rauner himself and the Sanders forces seem to have all but disappeared in this race.

Biss appears to be gaining strength as the progressive's choice against Rauner. He's taken on a toned-down version of many of Sander's positions, ie. free college tuition (community college only?) on minimum wage, education funding, elected school board for Chicago, tax reform (without specifics) and more. But so has nearly all of the Democratic pack.

Sticking points for us include his votes (sponsorship) for the unconstitutional pension-theft legislation. Is he self-critical? Why didn't he and other progressives speak out against the Level III pension privatization option in the recently-passed SB1 budget bill? I'm sure Brother Fred will have plenty to say on that one.

All this and more tomorrow at 11 a.m. CDT on Lumpen Radio. Tune in.
Posted by Mike Klonsky at 7:00 AM