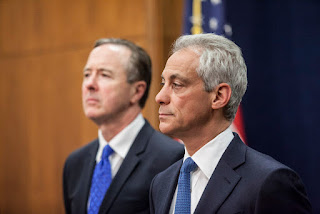 Once again, Mayor Emanuel has topped Governor Rauner’s ruthlessness towards Chicago’s public school students with his own savage, short-sighted response, by further stripping to the bone schools that he’s forced to function in a climate of civic abandonment and the violence that his neglect has caused. -- CTU Blog

Evidence of the mayor's racist duplicity is mounting as he and his hand-picked schools boss, Forrest Claypool, deliver another gut-wrenching, crippling blow to the mainly black and Latino children, families, educators and workers of Chicago's public schools.

Yesterday came the announcement that CPS was laying off nearly a thousand more staff members including 350 teachers. According to the plan,  600 support staff positions will be eliminated, mostly in high schools. Additionally, 356 teachers will be let go, with 240 at the elementary level and 116 in high schools.

According to Stacy Davis Gates of the Chicago Teachers Union, 362 classroom aides were let go, along with 221 members of SEIU Local 73, which represents special education aides and security guards. Gates thinks more cuts will follow. She predicts that CPS plans for the upcoming school year will lead to the closing of more neighborhood high schools — and the layoffs of African-American and Latino teachers, most of whom are women.

Yes, it's true that the lion's share of the blame for the devastation of public education now taking place statewide, falls on our sociopathic Republican Gov. Rauner who just last week, vetoed the emergency school-funding bill. Then there's a Democratic-Party-dominated legislature, has long been gutless when it comes to making the state's wealthiest shoulder their fair share of the tax burden.

But when it comes to racist duplicity, the buck stops at the fifth floor of City Hall. Why? Because this latest round of cuts, which hits hardest at predominantly African-American and Latino high school students, comes on the heels of Rahm Emanuel's plan to make it more difficult for city students to receive their hard-earned high school diplomas.

The mayor mandates that kids without a job offer or college acceptance can no longer graduate from high school. There's an exception to the new rule. Enlisting in the military can fulfill the graduation requirement which could make CPS the nation's number-one military recruiter of black and brown youth.

Yesterday's layoff of hundreds of staff, follows last year's round of layoffs of 1,000 teachers and staff, including counselors, and will condemn that many more students to academic failure and loss of future college and job prospects. They're losing the very support network needed to help them fulfill the new mandates.


Critics say Emanuel’s idea is an empty gesture that does nothing to address the fact that many teenagers are graduating in ­impoverished, violence-racked neighborhoods with few jobs, or that the most readily accessible community colleges are ill-prepared to meet the needs of first-generation students from low-income families. They also point out that the 381,000-student district laid off more than 1,000 teachers and staff members in 2016, and it is in such difficult financial straits that it struggled to keep its doors open for the final weeks of the school year.

The CTU correctly points out that Rahm’s slash and burn response sets the stage for the closure of dozens of neighborhood high schools and accelerates the exodus of Black and Brown people from the city,

It's time to put an end to Rahm's racist duplicity and his unfunded mandates and put control of the schools into the hands of a popularly-elected school board.
Posted by Mike Klonsky at 6:29 AM