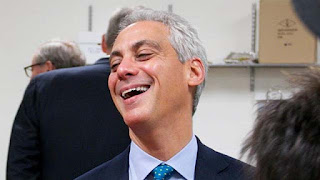 As he was laying off nearly 1,000 more CPS teachers and staff, Rahm Emanuel, speaking at Wednesday's Chicago Investors Conference,  promised the city's hedge funders and investment bankers -- his biggest campaign contributors -- that he will continue to be their faithful servant.

Emanuel claimed the biggest challenge facing the city is the need to renegotiate labor agreements with 90 percent of the city's 30,000-member workforce, which expired June 30. Those up for new contracts include laborers, firefighters, police and other municipal employees.


The unions must partner with the city to ensure those labor agreements "benefit the entire city," Emanuel said. "As we negotiate the new contracts, I expect … to see savings in wages and benefits, health care and other places that are key to the City of Chicago’s future."

Emanuel used the speech to tout the greatest hits of his nearly two terms in office, including Chicago's status as the No. 1 city for corporate relocations and its bragging rights as the restaurant city of the year, as determined by Bon Appetit magazine.