Was Moskowitz running to Trump for cover? 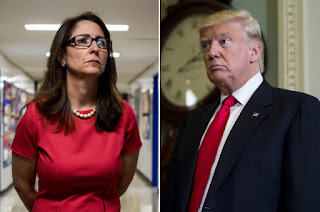 Last month, charter schools' biggest hustler, Eva Moskowitz, who pulls down a half-million/year as the operator of N.Y. Success Academies, was in the running for Trump's Sec. of Ed post. She didn't get the job. Trump gave it to fellow plutocrat and religious zealot Betsy DeVos instead.

The Trump transition team may have been frightened off by the spate of negative press about her schools' discipline practices and internal workings and the ongoing federal investigation conducted by the Office of Civil Rights, as well as mounting criticism from local elected officials. It is unclear whether Moskowitz could have even been confirmed as a cabinet official of an agency that is investigating her schools.

But that didn't stop Mokcowitz, a Clinton supporter, from swearing loyalty to Trump and his plan for market-driven public schools.

Then, no sooner had she plopped down $68M in school money for the purchase of ground-floor classroom space in a glitzy Midtown tower, when the auditors caught up with her.

Today she is under fire for financial mismanagement and allegedly ripping off the taxpayers and even her own Success Academy schools for millions of dollars, including thousands that were supposed to have been spent on services that were never delivered to students with special needs.


An audit  by city Comptroller Scott Stringer discovered rampant inaccuracies in the financial reports of Eva Moskowitz’s Success Academy charter school chain—including internal assessments that created the appearance of lower administrative costs, bills to the city for special education services the company could not prove it ever provided and duplicative payments that the chain’s management arm collected from its schools.

The audit found that in fiscal year 2015, Success Academy schools paid the Success Academy Network an extra $624,342 for services that the Network should have provided in exchange for its $18.3 million management fee. Those services include staff training and professional development, printing, copying and student assessments.

All this has me wondering if this was the real purpose of the Moskowitz's flirtation with Trump. Was she running to him for cover, offering fealty and rendering unto Caesar in exchange for protection? Was she looking at a possible job in the Trump administration as an escape route from the arms of city prosecutors?

We'll soon find out if her gambit worked.

Cross-posted at Schooling in the Ownership Society blog.