Yes, he did use his personal email to conduct city business. So if Rahm ever runs for president (not likely), he will never hear the end of it. But if you were hoping Rahm's forced email dump would produce some new revelations or deep insights into the workings of the Chicago mayor's anything-but-transparent regime, forget about it. This was no Wikileaks, but rather a carefully planned dump of personal emails that mostly reads like a collection of the mayor's news clippings assembled by his overstaffed press office. Nothing revealing about the mayor's cover-up in the Laquan McDonald killing.

What is revealed is the easy access to the mayor for the state's corporate and hedge-fund muckety-mucks (Pritzker, Rowe, Griffin, Rauner...), especially on matters of privatization, unions (CTU) and pension-busting and the privileging of charter schools (especially Noble Network) over neighborhood public schools.

Here, for example is a missive from former Exelon CEO John Rowe to Emanuel on public school reform efforts. 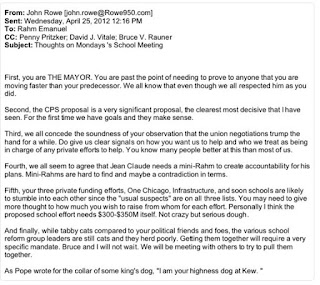 The first line has Rowe coming to bury former Mayor Daley, not to praise him, in a statement that reads like it was from Shakespeare's Caesar. 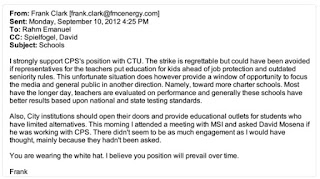 And another from Clark bashing union teachers:

I strongly support CPS's position with CTU. The strike is regrettable but could have been avoided if representatives for the teachers put education for kids ahead of job protection and outdated seniority rules.

Interesting side-note here. Both Rowe and Clark have a Noble charter school bearing their name.

And then there's more Rahm boasting to city billionaires about how he screwed city workers.
From Chicagoist:


Emanuel’s controversial call to phase out Chicago’s retiree health program will leave some 10,000 of workers on the hook for coverage—a move he publicly touted as a regrettable but necessary cost-saving measure. In the email, however, Emanuel comes off as downright boastful about the move. Wealthy investor Henry Feinberg asks, “Since when did Rahm Emanuel let a judicial ruling get in his way and not find a creative work around solution[?]” Emanuel replies, “Never which is why I eliminated health care. Only elected official to eliminate not cut or reform a benefit. Thank you vey much. A 175 million saving!”

There's a few other interesting tidbits, like Rahm's Public Affairs Director Lisa Schrader assuring the mayor that indeed, the SUPES/Byrd-Bennett scandal is a big story.

Rahm’s email dump can be found here. You can search by subject. For example, put Rauner in the search box.
Posted by Mike Klonsky at 6:20 AM