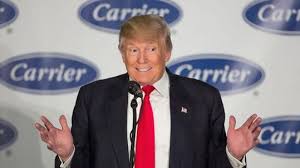 No, it's not the companies he's after. It's their workers' standard of living. It's a political bait-and-switch. On the campaign trail, the billionaire populist rails against against corporations on behalf of the "little people". But it's all done with a wink and a nod.

Trump's staged fight with Carrier was never about exporting jobs to Mexico. Carrier is still doing that and will continue to do that, or threaten to do it with impunity under the Trump regime. The very threat sparks a Trumpian sweetheart deal including fat government contracts for giant parent company United Technologies and a whopping tax break in exchange for a promise to retain a relative tiny number of those jobs here.

In the case of Carrier, many of the "saved" jobs were never going away in the first place. To put it another way, I'll quote USW Local 1999 Pres. Chuck Jones, whose union was never even consulted in the negotiations between Trump and Carrier.:


“But he got up there,” Jones said Tuesday, “and, for whatever reason, lied his ass off.”

Turns out, there were never any 1,100 jobs on the line. But those whose jobs were "saved" are grateful for Trump and Carrier's benevolence. It's as if having a job that pays a living wage is some sort of gift to workers from the almighty "job creators". The media buys the narrative, without even looking at the real numbers. The phony war ends up being a win-win for Trump and the company.

The same hold's true with his phony spat with Boeing over the $4B price tag on the new Air Force 1. There was never a $4B price tag. Trump made that up. In fact, the plane they were talking about won't even be in production until 2020. Trump has no intention of voiding the Boeing contract. Trump even flies around now in his own private Boeing-made jet. It's the one he charges taxpayers $1.6M to fly his secret service protectors around on.

So what is this staged fight really all about? It's just another way to put downward pressure on wages and living standards of those "greedy workers" and their unions (what's left of them). Trump is and will continue to blame union workers "forcing" companies like his own, out of the country.

Since Trump went after Pres. Jones on Twitter, Jones has received hundreds of death threats. No one knows how the cowardly callers got his phone number. You can guess.

Yes, Trump's fight with the company was just a charade.

But lots of workers aren't buying it. Yesterday in D.C. hundreds of federal contract workers held a one-day strike calling on Trump to fulfill his campaign promises to American workers.

This from Think Progress:


While workers across the country are fighting for a higher minimum wage and better benefits, federal contractors said their situation is particularly dire. The federal government funds more low-wage workers than McDonald’s and Wal-Mart combined, according to a 2013 study. And a report released earlier this week found that federal contractors stiff workers of billions of dollars each year by violating minimum wage laws, misclassifying workers as “independent contractors,” and denying them paid leave and other benefits.

Of course, this isn't Trump's doing. But it's a sign that working people and their families, including many of those who voted for him, are going to hold Trump's feet to the fire.
Posted by Mike Klonsky at 11:56 AM