Put school closings behind us? 'NO WAY'! Families occupy classrooms at Lafayette.

Three weeks ago, a well-orchestrated call could be heard, coming from Clark Street and the 5th Floor at City Hall. "“We are putting the past behind us,” Byrd-Bennett said. “It is time to turn the page” on school closings. Yesterday, the community resistance movement answered back. 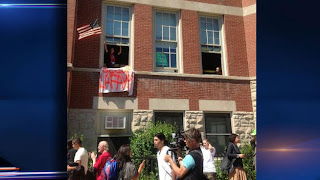 As the first wave of schools were being shuttered, with more than 850 CPS teachers and staff being fired, angry parents, teachers and community groups protested outside the auditorium where Byrd-Bennett spoke,


"There's something about these folks who use little black and brown children as stage props at one press conference while announcing they want to fire, lay off or lock up their parents at another press conference," CTU president Karen Lewis said.

The community also rallied outside of Lafayette School to support families who occupied classrooms in a last-ditch effort to save their school. Rosemary Vega and her family heroically occupied a classroom in the school and held it for more than four hours. They finally left after the police reportedly threatened arrests and the removal of the children to the custody of DCFS. The Burgos family also took part in the occupation. Nidalis Burgos, now a student at Lincoln Park H.S., learned how to play the violin at Lafayette Elementary School. It’s what brought the 15-year-old from “dim to light,” she said.

Lafayette students are being sent to Chopin Elementary, seven blocks away, where the future of Lafayette’s Merit School of Music program is uncertain, as is the program for autistic children.

Sun-Times columnist Mark Brown does a good job of documenting the pain being felt by draconian budget cuts, being by the surviving schools.


Lost in the continued angst over school closings, many surviving Chicago Public Schools are facing painful budget cuts that may end up eliminating more jobs and disrupting more students than did even the closings.