Byrd-Bennett's 5-year plan is perfect, except for that fact that ... 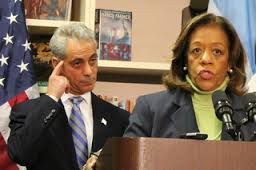 ...there really is no plan and BBB probably won't last 5 years.


For the first time since Mayor Rahm Emanuel took over CPS, his CEO laid out an education plan, calling for high academic standards, more focus on parental engagement and greater accountability for the district, including an annual scorecard. -- Catalyst

Ok, but what are the specifics of the plan? The Sun-Times supports the plan. Here what they have to say about it.


"Much of the plan already has been announced, and it was short on details... But where’s the money to do this well? Ditto for arts education and better attendance (it takes people and time to hunt down truant kids). Byrd-Bennett says they’ll redirect resources and tap outside funds. That’s a start but not a recipe for lasting change."

Umm, no specifics, no recipe for lasting change, and no money to implement. So what is it you actually support here, S-T editorial board?

Well there is "parent engagement". Doesn't saying those two words constitute a plan of some sort?

Well it might, if we didn't already know what BBB means by parent engagement. 20,000 turn out for sham hearings to protest school closures. BBB attends none of them. The she announces that all 20,000 supported closures. Parent engagement.


But Byrd-Bennett’s announcement at Westinghouse High School raised immediate questions about how the board would pay for the initiatives. And following the announcement, Board President David Vitale confirmed that principals, who received their school budgets just last week, will have to make do with less.

Making do with less? Why, that's the same 5-year plan we just had. Thanks President Vitale.

OK, so what do the teachers, who have to carry out the plan, think of it?

We don't know. No one's asked them.


“It is amazing that CPS’s first impulse, no matter who heads it, is towards an autocratic, top-down approach that people who actually work with kids are expected to implement without the appropriate resources or tools. When will CPS understand that having a ‘plan’ that never includes the voices of parents, students, CPS workers and a realistic blueprint on how to generate revenue will continue to foster mistrust, alienation and lowered expectations, especially after the tragic closing of 50 schools?” -- CTU Prez Karen Lewis

So much for the plan.
Posted by Mike Klonsky at 2:08 PM

Email ThisBlogThis!Share to TwitterShare to FacebookShare to Pinterest
Labels: Byrd-Bennett