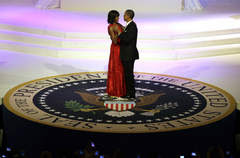 "For we, the people, understand that our country cannot succeed when a shrinking few do very well and a growing many barely make it. We believe that America’s prosperity must rest upon the broad shoulders of a rising middle class." -- Pres. Obama

After all the heavenly words about "we the people" this and "the pursuit-of-happiness" that, and after the magic moment, the dance, and the gazing at Mrs. Obama's stunning Jason Wu gown and bangs haircut is over, we still come back down to earth, to a city where Obama's boys are killing us. 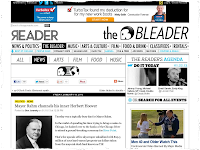 No need to look any further than Ben Joravsky's latest Reader piece, "Mayor Rahm channels his inner Herbert Hoover" where Ben refers to a picture the Tribune ran of the River Point ground-breaking scene, Mayor Rahm and a developer are laughing as if they're sharing a private joke.


The punch line of which is: Can you believe we get away with this shit? The caption under the photo reads: "Mayor Rahm Emanuel, seen here shaking hands with Daniel Fournier, CEO of property development firm Ivanhoe Cambridge, has been tapping into a network of venture capitalists, law firms and leaders of his economic-development team to build up his re-election war chest."

******
The word, education cannot be found even once in the president's speech and there is only one vague reference to "school reform." So I guess that means four more years without a re-authorization of ESEA, and by default, more years of Arne Duncan's devastating Race To The Top -- leveraging billions in federal ed dollars to push school closings, privately-run charter schools, mass teacher firings, and more testing madness.

On the positive side, there was a least a mention of poverty in the president's speech, and the fact that poor people even exist in this country and that we are all not middle class.


We are true to our creed when a little girl born into the bleakest poverty knows that she has the same chance to succeed as anybody else, because she is an American; she is free, and she is equal, not just in the eyes of God but also in our own.

Then there was this, spoken at the very moment when a Democratic Illinois governor and the state's machine political bosses are leading the raid on the pensions and medical care of the elderly and inform.


And we must be a source of hope to the poor, the sick, the marginalized, the victims of prejudice –- not out of mere charity, but because peace in our time requires the constant advance of those principles that our common creed describes: tolerance and opportunity, human dignity and justice.


*****
The confluence of Obama's second inauguration with Dr. King's birthday, led to another round of What would King do? debates. My old '60s SDS friend, Tom Hayden believes that MLK would have supported Obama [of course] and then privately and quietly counseled him on drones and Afghanistan. He might be right. Of course we can never know for sure. But I'd like to think that Dr. King would be out in the streets on Inauguration Day and not in tux and tails at Obama's side while school re-segregation is on the rise and U.S. drones and torture cells are central to administration foreign policy. As a product of the times, it's impossible for me to envision Dr. King as a supporter of any Race To The Top or union-busting charter schools.


Chicago activist priest, Father Michael Pfleger tried to act in the King tradition. Instead of bearing witness to  Obama’s second inauguration in prime seats in Washington, D.C., he went to an Aurora High School Monday night with a Martin Luther King Day warning: The slain civil rights leader’s message must not be watered down, and he should not be treated like a history lesson.

Another man born and reared in the same tradition as King, Dr. Cornell West went ballistic over Obama's symbolic use of Dr. King's bible as his inaugural prop, which West called, "an affront to human rights." 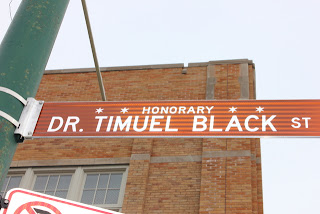 Finally, I was overjoyed to see true King disciple (or was it the other way around?) and living legend, 94-year-old Prof. Timuel Black, receive his overdue Champions of Freedom Award and a Chicago street sign bearing his name. Among his other lifetime achievements, he led the organizing that went on around the historic March on Washington in 1963. Congrats again to my dear friend Tim.