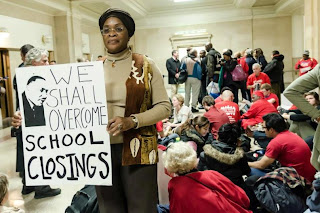 "Closing high schools highly correlates to drop out rates and spikes of violence. Hopefully they learned their lesson about that." -- Karen Lewis

Parent and community voices from Chicago's targeted neighborhoods are ringing out so loudly against school closings, that the mayor's "reform" strategy -- replacing public schools with privately-run charters, has now become an uphill battle.

Yesterday, a big monkey wrench was tossed into Rahm's school-closing machinery, when Barbara Byrd-Bennett's own hand-picked, rump Commission on School Utilization issued its Interim Report. The report offers no advice about which of the mayor's targeted 80-120 schools to close in the coming year. But it did make a few recommendations on which schools NOT TO CLOSE. These include:

The commission also took it upon itself to offer a vague rejoinder that CPS hold privately-run charters to "the same standards to which it holds district-run schools."

While the Commission's recommendations are based upon shaky CPS data (see Wendy Katten's letter to BBB on School Utilization) and while the report is non-binding, the mayor now faces huge political and legal fallout if he goes against the Commission's findings. After all, he had BBB create the group as a way of avoiding legislature's own legally established Chicago Educational Facilities Task Force (CEFTF) and  state law mandating CPS to present a rationale and get community input before closing any more schools. Now the reputation of Commission Chairman Frank Clark, a retired ComEd CEO, and Rahm political backer, is on the line along with the credibility of its members.

Community protests and opposition to school closings are obviously reverberating inside commission meeting rooms. If the report shows anything, it's that CPS has not met the state's preconditions for any mass closings or charter-izing and that there's a possible battle brewing between Rahm and Byrd-Bennett over school-closing and charter opening strategy.

I'm glad Frank Clark's group is showing some independence from the mayor and that cracks are widening within Rham's reform plan. But the report still leaves in doubt the fate of 137 elementary schools, nearly all in the city's least served and resourced black and Laatino neighborhoods. The Commission should have gone a step further and supported the call of the CTU, community groups and parent organizations across the city, for a one-year moratorium on all school closings, turnarounds, or on opening any new charter schools.