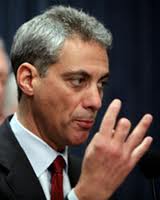 Is Rahm really flipping off BBB's own hand-picked School Utilization Commission, led by former ComEd boss Frank Clark, which recommended keeping hands off of high schools when it comes to school closings? If he is it won't be the first time he's dissed the hired help. Remember his hand-picked arbitrator during the teachers strike who recommended a 15-20% pay raise for teachers?

Clark's commission wants as few as 15 schools closed instead of the 200 being pushed by the Civic Committee. Commission members reportedly feel that CPS is "incapable and doesn't have the capacity to close 100-plus schools."

Rahm is also undermining Byrd-Bennett in the process. I knew he would. Didn't everyone expect this when she took the job?


"The commission has provided a reality check that gives Barbara Byrd-Bennett a credible basis to push back against those that may be calling for massive closings," said a source with ties to the district. "The hearings they have conducted have been a real wake-up call to understand the reality for so many families and students who will bear the brunt of this dislocation without the assurance of real improvements in their educational opportunities."

Another point: Why do we still have to get the real deal about our schools from deep-throat "sources" like the one above when BBB promised us transparency when she took the job?

More on that to come.
Posted by Mike Klonsky at 1:28 PM