Teacher unions will be a key issue at SOS Convention 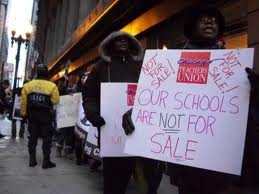 For those readers who don't know, I have spent much of the past year as an elected National Steering Committee member of SOS. It has been a difficult but rewarding experience helping guide SOS's development and transition from an ad hoc group of last year's march organizers into a viable national organization. In the remaining 10 days leading up to the SOS Convention in D.C., I will try and post some thoughts about key issues, challenges, and possibilities facing this emerging organization.

At this year's meeting, I am co-chairing a panel of teacher union activists, followed by a workshop on labor issues. Up until now SOS's stand toward and relationship with teacher unions and organized labor has been only vaguely defined and has been a hot topic of debate within and outside of the Steering Committee.

I'm hoping that the Labor Workshop will produce a statement of support for teacher unions and in defense of teachers' (and all public employees') right to belong to a union and bargain collectively -- a right that is currently under assault by corporate school reformers, Tea Party governors in Florida, Wisconsin, Ohio and Michigan, big-city mayors like Chicago's Rahm Emanuel and New York's Michael Bloomberg, to name but a few.

I'm also hoping that this statement will be adopted by the entire convention. But even more important than passing a resolution is a plan for building national active support for current teacher union struggles. And there is none more important or holding greater national significance at the moment than the current contract battle between the Chicago Teachers Union and the district's mayor-controlled and hand-picked school board. I'm hoping that the entire convention will come out united around an active program of support for the CTU, especially if there's a teachers strike in the fall.

If you are planning on attending the SOS People's Convention and haven't registered yet, you can do it here. I hope you will join us and take part in our panel/workshop.