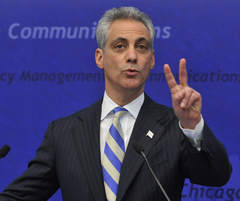 While kids in Chicago continue to die at two-to-three times the rate of troops in Afghanistan, the mayor and his corporate patrons are worried that the nearly 40% rise in killings this year is grabbing headlines and that  the body count may be bad for business.


We need the mayor, who is the city's best spokesperson, to be public in an aggressive way. He should be prepared to call convention groups and reassure them of everything that is going on. The mayor needs to be public in saying we don't have a crime problem. The real danger isn't to tourists. The real danger is a convention group that gets panicked and we lose millions. -- Laurence Geller, president and CEO of Chicago-based Strategic Hotels & Resorts Inc.

Rahm jumped on his assignment and used the shooting death of 7-year-old Heaven Sutton as a his chance proclaim that there is no crime problem here.


"This is not about crime. This is about values," shouted the mayor as if talking to an imagined attentive group of gang-bangers. He urged them to, "take your gang conflict away from a 7-year-old. Who raised you?"

Good job Rahm. No, this is not a "crime problem." It's about "culture." Yeah, that's the ticket. Not a word of course, about school closings, easy access to guns and drugs, issues of poverty and youth joblessness, all of which are major contributing factors to the alarming jump in youth violence.

But that's not Rahm's quote of the day. This is:


“Thank God for the rest of the country he didn’t listen to me.”

He was referring of course to Supreme Court decision which rule Obama's healthcare bill constitutional. White House Chief of Staff Emanuel was the main one trying to kill the initiative, calling it a political loser. A better quote might have been: "Too bad he listened to me on other stuff -- like, Guantanamo trials, the Dream Act and the drone war in Afghanistan."

While dozens of more Chicago teachers at Clemente High School continue to get pink slips, Rahm is dishing out millions in taxpayer money to his friends who own the Cubs and Bulls. His patrons include Democrats and Republicans and even far-right-wing Obama haters like the Ricketts family and school privatizers like Ken Griffin, CEO of Citadel Investment GroupHis Infrastructure Trust scheme will also fill their coffers. To keep schools afloat, Rahm is taxing property owners to the max for the second year in a row making schools even more reliant on this inequitable form of school funding.

Finally, speaking of culture, it may well be that a new prison may have to be built exclusively to hold convicted local machine politicians.  I'm thinking, maybe they can use the closed Tamms super-max prison.
Posted by Mike Klonsky at 3:38 PM