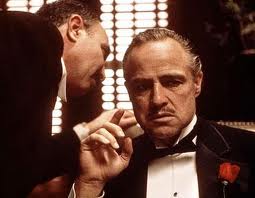 I always chuckle a little when the party hacks get their signals crossed and vote the wrong way. Then there's hell to pay. According to Sneed, Gov. Quinn was "Rahmed" yesterday by Chicago's foul-mouthed, Little Napoleon mayor. It seems the slow-witted guv got confused during the legislative session after Rahm and Boss Madigan threw in the towel on "pension reform." Quinn thought the great pension heist was still on and ended up siding with Republican boss, Tom Cross who had the bill tossed in his lap by Madigan. Then Quinn went against Rahm's pet casino project. Rahm responded with a barrage of F^%K YOUs. In other words, Quinn is toast.

Rahm is no Raymond so how about Everybody hates Rahm? First episode reveals how Rahm's poll numbers tumbling over his Walker-like assault on teachers and their union. Then comes NATO follies when he turns tourist Mecca, Chicago into a war zone. Other episodes taken from Daniel Klaidman’s new book Kill or Capture: The War on Terror and the Soul of the Obama Presidency, show Rahm blocking A.G. Holder's attempt to hold trials for Guantanamo captives in civilian courts and then imagining the Holders, the Obama's and Valerie Jarrett all conspiring against him. He seems to have big problems with people of color (especially black women) and once again his foul mouth gets him into trouble and he gets the boot as Chief of Staff.  There's more -- lots more. Like him telling  CTU Pres. Karen Lewis, "F^%k You" as he heads into contract negotiations. Is this show ready for prime time or what?

Why teachers will vote yes 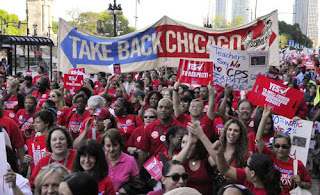 Sitting at a coffee shop a few days ago, I was asked by some friends, how I felt about teachers taking a strike vote. They couldn't understand, especially in these tough times, why any teacher would want to go on strike. I told them about what I saw at the CTU rally a few weeks ago and why I left the rally and march of thousands of teachers, feeling certain that any strike vote taken would surpass the 75% needed to authorize a strike.

The revelation came to me after interviewing a group of young, white, women, suburban-raised and schooled, teachers in the crowd at Grant Park. From what I could tell, many of them had only been teaching for a few years and none of them probably even knew anyone who belonged to a union, say 5 years ago. Now here they stood in the park, fists in the air singing along with thousands of other teachers, the old IWW tune, Solidarity forever, for the union makes us strong.

As we marched down Michigan Ave. and then up Adams St. past CPS headquarters, they chanted strike, strike, strike until union march monitors waved for them to cool the chant. After all, the union doesn't want to risk a strike unless there's no other option. But these young teachers had had enough and were ready to put it all on the line for the future of their profession.

I asked my friends, "what do you think the mayor would have to do to turn these teachers, who went into the profession for the love of teaching,  into union militants?  After a short review of Rahm's war on unions and on the teaching profession, I think they got it.