Steering clear of the fight

After Romney laid out the Republican platform on eduction, including union busting, vouchers and larger class size, the Democrats, including Pres. Obama and Sec. Duncan, immediately went into hiding. The reason? Thus far, their own agenda on education has been essentially the same as the Republicans and their appears to be no change in sight. Even on the few issues where they supposedly disagree, for example on school vouchers, Obama won't take Romney head-on, for fear I suppose, of alienating his wealthy and powerful corporate "reform" backers in Democrats for Education Reform (DFER).

As a result, the fight to save and transform public education has been left to a growing and vibrant grassroots movement of independent voices. Here's Dan Archer and Adam Bessie, masters of graphic journalism, posting their hard-hitting comic strip at Truthout:


Welcome to other side of the looking glass, and into the Bizarro world of so-called "education reform" - an upside-down universe in which up is down, left is right and multimillionaire CEOs are civil rights heroes championing social justice, while public school teachers are corrupt fat cats, maintaining a status quo which oppresses students in poverty and racism. -- The Disaster Capitalism Curriculum 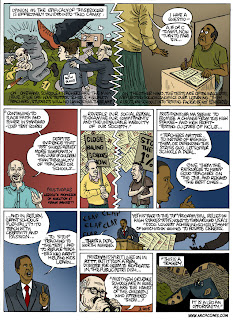 Along the same lines, with a day to go in the Walker recall election in Wisconsin, the president finally spoke out in support of Walker's opponent, Milwaukee Mayor Tom Barrett -- sort of.  After Obama flew over Wisconsin twice without stopping,  White House spokesman Jay Carney was repeatedly asked by reporters, why Obama, who has been criss-crossing the country to raise money for his reelection bid, did not do more to help Barrett, Carney replied:

Oliver Knox posts at The Ticket:

The phrase "stands by" might not be such a bad way to describe Obama's support for Barrett. The president hasn't exactly poured it on for Walker's challenger. In fact, he has mostly steered clear of the fight.

That pretty well sums things up until this point.
Posted by Mike Klonsky at 6:38 AM