The super rich pay a lot less taxes than they did a couple of decades ago, and nearly half of U.S. households pay no income taxes at all.

2. Richard Roeper's usually vapid column offers some pretty good insights on the GOP's racist presidential front-runner, Donald Trump. Just when you feel like you've had you fill of Obama doublespeak, along comes the alternative. 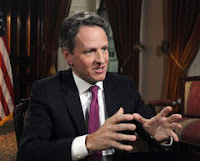 3. This AP wire story reveals that the big partisan battle over the debt limit is a phony war, staged so that the leaders of both parties, each afraid of their base, can save some face.

Geithner told ABC’s “This Week” and NBC’s “Meet the Press” that Republicans told President Obama in a White House meeting last Wednesday that they will go along with a higher limit. “I want to make it perfectly clear that Congress will raise the debt ceiling,” Geithner said in the interviews taped Saturday and aired Sunday. He said the leaders told Obama that they couldn’t play around with the government’s credit rating. “They recognize it, and they told the president that on Wednesday in the White House,” Geithner said.

Heather Harding, subbing for Hess, offers an interesting perspective on difference between TFA's  base and it's top (Kopp).


A colleague--also a woman of color--recently heard Diane Ravitch speak about current reforms and was shocked to be painted as part of the "conservative, neoliberal, free market, hedge fund manager capitalists" who are "ruining" public education. Having never thought of herself as The Man and only identifying with the vision of closing the achievement gap, it seemed a hard pill to swallow.

Hey Edweek. How about making this a permanent switch?
Posted by Mike Klonsky at 12:03 PM