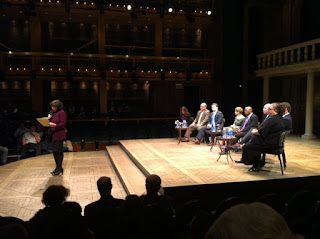 "The world's a stage" -- W.S.
No, it wasn't theater in the round. No rowdies crowding the stage, yelling epithets at King Henry V (Rahm?). The beautiful Shakespeare Theater on Navy Pier was instead the scene of a surprisingly subdued panel discussion, "Chicago in These Times: What's Next for Chicago Public Schools?" sponsored by the good folks at National-Louis University. I sat near an exit door as I am wont to do at events with 7 speakers, just in case boredom overwhelms me. But I managed to make it through last night's discussion, still wide awake, though a bit disappointed. I guess I was hungry for a little more struggle, given the current assault on Chicago (and the nation's) public schools.

I found myself grinding my teeth and muttering under my breath at comments by Teach For America's Josh Anderson. His portrait of the "good" vs. the "ineffective" teacher projected an efficiency model of teaching that has always creeped me out. His strategy for school reform is the current business model of identifying a privately-run charter (in this case Chicago's Noble Street), exaggerating its accomplishments (isn't it amazing that they all have 100% college-bound students), ignoring its problems, and then calling for replication and re-replication.

Mayoral candidate and community activist, Miguel del Valle  pointed out the obvious: "We are not going to charter our way out of this crisis." He called for a re-investment in neighborhood schools where the vast majority of kids in poverty still go to school.

From my view of the stage, CTU prez Karen Lewis held her own, provided some good anecdotal material drawn from her days as a teacher, and projected an alternative to Anderson's linear view of teaching and reform.

However, it was left to UIC prof Pauline Lipman and Rev. Calvin Morris, director of the Community Renewal Society to rouse the not-hardly rabble by putting the question of school reform squarely in the context of the abysmal social conditions facing most of the city's school children and their families. Lipman called for a turn away from teacher and school bashing and a turn towards community investment while Morris demanded an end to the city's "apartheid" school system.

Other panelists included Golden Apple prez Dominic Belmonte, and NLU's Ted Purinton. A classroom teacher in the audience asked (for the umpteenth time) why no current classroom teacher was on the panel and why teacher voices have been silenced during the current school reform debate? My hat goes off to her.

WBEZ reporter Linda Lutton facilitated the discussion and somehow--obviously much to my disappointment-- steered it away from any critical debate of Mayor-elect Rahm Emanuel school-closing, teacher debasing, union busting strategies  or his appointment of already embattled schools CEO, J.C. Brizard.

The mild tone of the discussion and the hushed whisperings in the audience belied the Shakespearean setting as well as  the coming political storm in the city's school community which faces its greatest test in the months ahead. What's next for Chicago public schools, indeed? No one really answered that question last night.

Whereof what's past is prologue; what to come,
In yours and my discharge. -- Antonio
Posted by Mike Klonsky at 9:43 AM