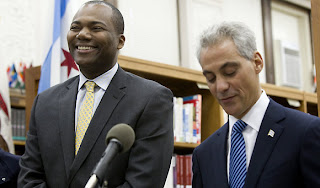 But who will have the real power?


Jean-Claude Brizard "leaves Rochester not as a conquering hero, but as a controversial figure whom teachers and parents accused of an autocratic style of leadership in pursuit of an idealized vision including privatization and weakening teachers' bargaining power."  -- Gapers Block

Brizard defied his Board's regulations on hiring, creating high-level positions without consent of his Board, while also dissembling about his actions in giving raises to his staff. In the wake of a testing scandal in D.C.spinning stats to support what he feels is "best for his students." that undermines the type of "reform" championed by the Mayor-Elect, it is comforting to know that Brizard has been caught -- -- Gapers Block

^^^^^^
OMG, Vitale's back
Emanuel has named David Vitale as his new board president. He was Daley's golfing buddy, named by the mayor in '96 as CPS chief administrative officer; he was the guiding hand behind Arne Duncan.
Vitale gives new meaning to the words top-down. The former bank president was even booted from his position as head of the Chicago Board of Trade for not being able to play well with others.  I wrote about him back in '05 (""Do we need a lot of public decision-making about replacing lug nuts? I don’t think so."--David Vitale") and here last October, remembering the Little Village High School hunger strike. Vitale once told me he thought  the hunger strikers' victory was "one of the greatest disasters in CPS history." Vitale saw the hunger strike tactic as "blackmail" rather than community and parent engagement.
I'm pretty sure that Vitale is there to ride herd on Brizard. He and the corporate reformers will have the real power, not the new CEO.
Other new board members are a mix of high-powered corporate types, like Hyatt Hotel mogul and union hater Penny Pritzker, who served as finance chair for the Obama campaign, and at least one good educator and community representative, Mahalia Hines, the veteran educator worked as a CPS principal and teacher for more than three decades. She now works with her son, Common — a hip-hop artist from the South Side — in the Common Ground Foundation.

But there's no mistaking where the power lies. Any dissenters, including Brizard, will soon find that out.
Posted by Mike Klonsky at 6:52 AM