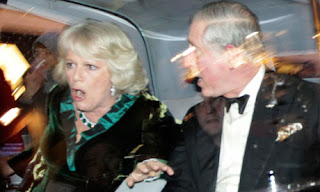 I must admit, when I first read about the attack on the royal Roller, I was pissed that some provocateur or anarchistic crazy had managed to knock yesterday's London student marches out of the morning headlines (they didn't).

But now that I've had my morning decaf, I'm imagining Prince Charles & Duchess of Cornwall (where the hell is Cornwall anyway?), adorned in formal theatre wear, driving their bullet-proof Rolls into the heart of a mass student anti-tuition raise/anti-education cuts march. Well now, THAT'S a provocation. Like waving a red flag in front of the proverbial bull, I'd say. Just imagine the symbolism here, particularly after the royals just announced plans to spend $60 million on the wedding of Kate & William, while thousands of Brit students watch their futures being yanked away from them because they can no longer afford college tuition.

Compared to that, what's a little paint splattered on the Rolls? They'll probably run right out a buy a new one. And next time these high-maintenance feudal relics need to exit the palace on their way to the theatre, they should tell their driver, "Jeeves, let's take a more circuitous route this time. What say?"
Posted by Mike Klonsky at 9:48 AM