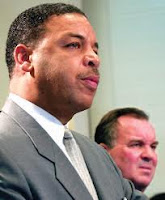 In the run-up to the Olympic Games, the mayor and school board president Michael Scott forced CPS principals, teachers, and students to turn out for rallies to support the mayor's failed campaign to make Chicago the Olympic City. Now we know why.

While serving as school board president, Scott negotiated key components of the $1.2 billion Olympic Village plan and had a long business relationship with developer Gerald Fogelson, who was vying to build the village. Scott served as a $10,000/month consultant on a condominium project near the proposed athletes village, a development that would increase in value if the city had won the Olympics. The city owns more than 750 properties in the immediate vicinity of two proposed Olympic venues, Douglas Park on the West Side and Washington Park on the South Side.

Scott lost a ton of money when his consulting fees from Fogelson were cut off after the bid failed. This combined with Scott's despondency over other failed business dealings is now being explained as a prime reason for his suicide.

1. In January, when the Police Department initially released the reports of its investigation into Scott’s death in response to media's Freedom of Information Act requests, it blacked out much of the documents — including the previously undisclosed details of Scott’s consulting deal. The Better Government Assoc. later obtained  the same heavily redacted police reports. The BGA now argues that leaving out so much of the police findings violated state law, and the police ultimately agreed to release some of the previously withheld information. But why not all?  Is police superintendent Jody Weis looking out for the mayor's interests here?

2. Who else from the school board and other city agencies and departments had conflicts of interest around the Olympic Games campaign? Anybody currently on the board? Anyone currently campaigning for mayor? Just asking.

3. How long until we know results from other investigations of misconduct and mismanagement of school funds by Daley's hand-picked board of bankers and developers, including misuse of school board credit cards?

4. Is this the reason, or one of the reasons why Daley wants a business person rather than an educator in charge of the schools?

5.  Do we need a clearer example of why City Hall's corrupt politics and the administration of the public schools ought to be kept miles apart rather than all under the autocratic control of the mayor?
Posted by Mike Klonsky at 12:29 PM