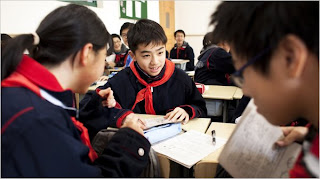 The Chinese, who have a 10th of our wealth, are running a great education system.-- Bill Gates

In a recent Newsweek interview , Gates lauded China's school system for producing high math/science scores on an international standardized test. Arne Duncan, as one would expect, followed suit, calling the test results a "wake up call." Conservative think-tanker Chester Finn then chimed in with some cold-war rhetoric, likening the Chinese teenagers' test results to the 1957 Soviet launch of Sputnik.

It never ceases to amaze me how  intensely our so-called free-market leaders seem to despise China and its political system, while at the same time envying their centralized, bureaucratized and standardized educational system. It seems like Gates, Duncan and Co. love China's system more than the Chinese themselves do.

A story in Tuesday's New York Times, "Shanghai Schools’ Approach Pushes Students to Top of Tests,"
seems to bear me out on this. Educators in China are growing increasingly critical of their school system which they say is too test-oriented, stifles creativity and often deprives children of the joys of childhood.


“These are two sides of the same coin: Chinese schools are very good at preparing their students for standardized tests,” Jiang Xueqin, a deputy principal at Peking University High School in Beijing, wrote in an opinion article published in The Wall Street Journal shortly after the test results were announced. “For that reason, they fail to prepare them for higher education and the knowledge economy.” In an interview, Mr. Jiang said Chinese schools emphasized testing too much, and produced students who lacked curiosity and the ability to think critically or independently.“It creates very narrow-minded students,” he said. “But what China needs now is entrepreneurs and innovators.”

China's school system is also marked by vast inequities. Schools in prosperous Shanghai are well-equipped while those in the rural areas suffer from lack of resources. As you might expect, this produces an "achievement gap" eerily familiar to educators here in the U.S.


While Shanghai schools are renowned for their test preparation skills, administrators here are trying to broaden the curriculums and extend more freedom to local districts. The Jing’An school, one of about 150 schools in Shanghai that took part in the international test, was created 12 years ago to raise standards in an area known for failing schools.The principal, Zhang Renli, created an experimental school that put less emphasis on math and allows children more free time to play and experiment. The school holds a weekly talent show, for example.

So while Chinese educators push for more freedom and autonomy in schools and less testing and standardization, we in the U.S. are racing in the opposite direction.

The question is--what exactly is it that Mr. Gates, who calls himself an innovator, admires so much? Perhaps it's the idea that Chinese graduates will have acquired the basic skills needed to work for a company like Microsoft, be more compliant on the job, while working for less money. Perfect!