Can the billionaire philanthropist and the president of the AFT find common ground? 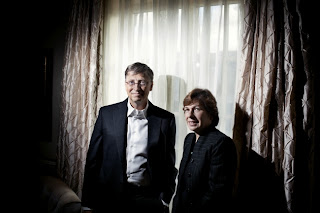 "You know, a quarter of our teachers are very good. If you could make all the teachers as good as the top quarter, the U.S. would soar to the top of that comparison." -- Bill Gates

Someone should probably point out to Mr. Gates that his statistical approach to teacher evaluation doesn't allow for all teachers to be as good as the top quartile. If they were, there would still be a top and a bottom 25%.

Gates reveals more of his misunderstanding of the teaching profession and school reform in general in a Newsweek interview given jointly with AFT prez Randi Weingarten, in which he holds China up as his model for U.S. school reform. Gates appears envious of  China's highly centralized, low-budget, test-crazy, union-free school system.

Chinese students recently outperformed 15-year-old American students on standardized tests in math, reading, and science. This caused Secretary of Education Arne Duncan to call China's performance on the PISA exams a “wake-up call” and conservative think-tanker Chester Finn, who served in Reagan’s Department of Education, to liken it to “Sputnik,” the man-made satellite launched by the former Soviet Union in 1957 that shocked Cold War America.

But Michigan State education professor Yong Zhao  notes the growing criticism of the system coming from within China itself--from students and parents who would certainly take issue with Gates, Duncan and Finn.


I don’t know why this is such a big surprise to these well educated and smart people. Why should anyone be stunned? It is no news that the Chinese education system is excellent in preparing outstanding test takers, just like other education systems within the Confucian cultural circle—Singapore, Korea, Japan, and Hong Kong.

Yong refers to a  recent story in the Chinese media that has created quite a stir.


The story, entitled A Helpless Mother Complains about Extra Classes Online, Students Say They Have Become Stupid Before Graduation, follows a mother’s online posting complaining about how her child’s school’s excessive academic load have caused serious physical and psychological damages.

The Newsweek interview has the world's second-richest man and the union's most influential leader finding common ground on many current school reform issues. They each place school reform in the context of global competition for world market share. They both admire countries with a single set of common national standards to drive curriculum and testing in every school. Neither pays much attention to the growing educational inequities inherent in our increasingly racially and economically bifurcated society. Instead, they each focus on ways to identify bad teachers, push them out of the profession, and revamp teacher evaluation, including use of video cameras in classrooms.


"Football teams do this all the time, says Weingarten. "They look at the tape after every game. Sometimes they do it during the game."

Gates and Weingarten disagree, however, when it comes to spending on public education--Randi wants more, Bill wants less. But what's a few hundred million among friends. Maybe they can split the difference.
Posted by Mike Klonsky at 6:55 AM