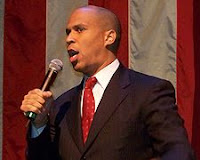 Newark's Mayor Cory Booker has drunk some of David Brooks' "Harlem Miracle" kool-Aid. But here at Huffington he sounds more like a small-schools pragmatist than he does a neocon ideologue:

I have no loyalty to charter schools, traditional public schools, magnet schools, small school models, publicly funded scholarships (vouchers) or private schools. I have loyalty to results. The important question should not be one of philosophy or political perspective, it should be: What is working to empower poor and minority children to have the same educational opportunities in America as those who are more affluent? ...We have recently begun a small school initiative for our high school students who are at risk of dropping out. Further, among other things, our new superintendent is looking to expand our magnet schools of excellence which have long waiting lists and completely reorganize our persistently failing schools.

By neocon ideologue, I mean someone more like Hoover Institute's Caroline Hoxby who tries to peddle some snake oil in St. Louis. Hoxby claims that her own study shows an imaginary matched pair of students--one going to a regular public school and one going to a charter (any charter will do)--with the charter school student coming out way more successful. That study, she says, offers proof of total charter superiority. She also claims that her imaginary charter school has all but eliminated the so-called "achievement gap." But then the inevitable happens. Real life rears its ugly head. Some local has the nerve to ask Hoxby:

Why aren’t charter schools in St. Louis performing so well?