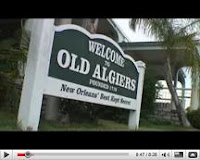 Hurricane Katrina was a tragedy, but, as the late conservative economist, Milton Friedman wrote in his Wall Street Journal op-ed, it was "also an opportunity."Katrina did indeed turn into a great opportunity for free-marketeers to bust labor unions, close public housing and privatize school operations in New Orleans. Schools chief Paul Vallas even recalled that after Katrina, he no longer had “institutional obstacles” to worry about— no school board, no collective bargaining agreement, a teachers’ union with very little power.

Now we learn, it was also an opportunity for white vigilantes in Algiers Point to “go hunting” for black storm victims.

From ProPublica and The Nation:

"It was great! It was like pheasant season in South Dakota. If it moved, you shot it." A native of Chicago, Janak also boasts of becoming a true Southerner, saying, "I am no longer a Yankee. I earned my wings." A white woman standing next to him adds, "He understands the N-word now." In this neighborhood, she continues, "we take care of our own."