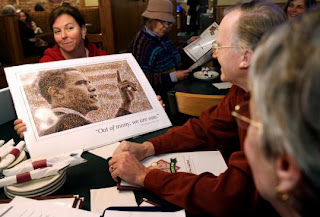 Today’s Boston Globe reports that Obama supporters, including educators, have continued to organize and keep the movement alive since the election.

If Obama's campaign was about bringing change to the country, the post-election period is about defining what that change means and how to achieve it. His backers are already using networks developed during the campaign to rally support for causes including building local neighborhood organizations and eliminating racial disparities in the criminal justice system.

Some former Obama volunteers have already launched specific projects. Rita Rogers, a fifth-grade teacher in Akron, Ohio, used the campaign website's social networking technology to develop a new group called Ohio Teachers for Obama, which she hopes will grow to influence national education policy. Rogers, 55, said she is particularly concerned that the increased focus on standardized testing is hurting students.

From the Oklahoma Daily:

This teacher was infamous in my small hometown in north-central Oklahoma. She was the one who told students to not use the word “gay” as an insult. She was the one who kept a copy of the Quran in her classroom, to the dismay of the community and to my high school self. She was the one who wore black the day after George W. Bush was re-elected in 2004. The school board tried to get her fired… Continue HERE