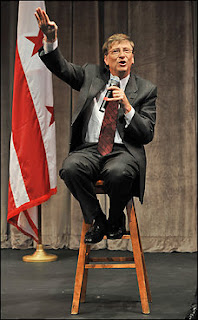 The good Bill Gates (not the used car salesman) appeared today in D.C. and gave a pretty good speech--until the part about Michelle Rhee, that is. He called on President-elect Barack Obama and the U.S. Congress to expand support for education and make the federal government “a dynamic agent of school reform,” even as the nation struggles through grim economic times. Gates also urged that any economic stimulus package passed by Congress not only include support for school construction, a priority cited by Obama and congressional leaders, but also provide assistance to states to avoid cuts in higher education. He also applauded recent talk about making "somewhat of a shift away from [defense] spending overseas."

He didn't say who he favored for the position of Secretary of Education. He probably doesn't care that much since most of the short-listed candidates are his grantees.