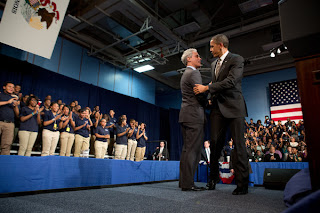 I was glad, if skeptical, heading into President Obama's appearance in Chicago last Friday. But  was once again left with that old post-speech, empty feeling as I sat in traffic coming back from the south side, waiting for the president's motorcade to clear out. It seems I wasn't the only one.


Almost as soon as he began to talk, I found myself deeply incensed at President Obama’s address in Chicago this past Friday. I hoped, along with the 50,000 folks who petitioned for this speech after Hadiya Pendleton’s murder, that the president would offer both empathy and solutions to a community shell-shocked by massive violence. Instead when the president began by suggesting that we need to “do more to promote marriage and encourage fatherhood,” I started shaking my head.

Rather than empathizing with those Black families that have been destroyed by violence, he blamed the prevalence of non-nuclear Black families for contributing to it! Recycling this tired narrative about broken families and absentee Black fathers does nothing to address the steady flow of guns into our communities, nor the pathologies that lead young people to fire them.

Melissa Harris-Perry wasn't as harsh, but offered a similar critique:


Harris-Perry said that as she has spent most of her time with her daughter being an unmarried mother, she bristles at negative discussions of single motherhood. She then went on to cite statistics, which find that while 41 percent of single mother families live in poverty, only 14 percent of single mothers with full-time, year round work live in poverty. “So that’s an indication to me that this is as much an issue about economic opportunity, about the opportunity for good-paying, full time work” as family structures, she said.

To be fair, Obama did talk some about gun control, the need for greater economic opportunity and an expansion of early childhood education. But the speech rang mostly hollow, with the President delivering it surrounded by the same gaggle of local machine pols whose  policies are in many ways responsible for the local gun violence epidemic:  the closing of hundreds of schools, the funneling of millions of dollars into the pockets of charter school hustlers, and the ensuing further destabilization of south and west-side communities.

I'm sure the Chicago speech gave a temporary morale boost to many of the kids at Hyde Park High School and maybe to those at King, where Hadiya Pendleton and her accused shooter both attended school. But the community needs so much more and so much less of blaming distressed families, themselves the victims of the de-industrialization and the resulting massive stretches of urban  poverty left in its wake.