LAUGHABLE...Rahm's puppy dog in the 32nd Ward race is someone named Elise Doody-Jones. She's running against our progressive Alderman Scott Waguespack, Scott was one of only 4 aldermen with enough ganas to vote no on the mayor's rotten budget.

Doody-Jones, who doesn't even live in the ward, is the beneficiary of a big chunk of that $2M pot of gold from the mayor's Super PAC. "Chicago Forward" is run by his former CPS Liar-in-Chief Becky Carrol -- not the brightest bulb on the tree. 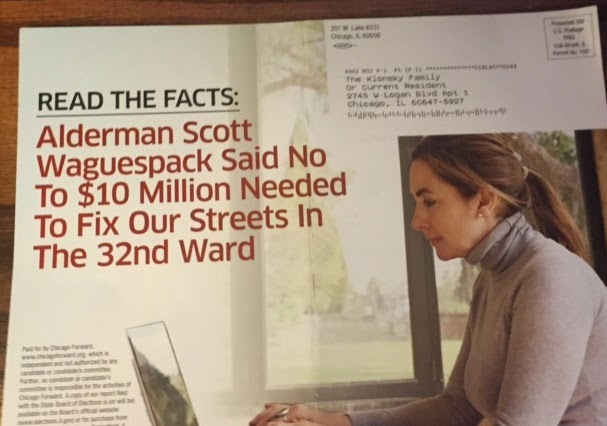 Case in point, this slick propaganda piece that came in the mail yesterday attacking Waguespack for supposedly voting against $10M to fix the city's potholes. Yes, it's true that hundreds of pot holes remain unfilled from last winter's storms --that's right, a year later-- and every driver whose car smashed through one has been heard screaming, "Fu*k you, Rahm Emanuel" at the top of their lungs (me included).

But the expensive card-stock  mailer tries to take the heat off the most-hated mayor in the country by blaming our alderman for the city's failure to fix the streets, even though Rahm's budget, including the pothole money, was passed easily by a gaggle of boot-licking city councilman. The flier even has a picture of a still-unfilled pothole at Racine and Wrightwood -- not even in Waguespack's ward -- to remind us how much we disdain this mayor.

Actually, Scott's ward ranks among the highest in seeking pothole work. He even sponsored a separate bill to boost spending.  But the way the machine works is that the mayor can punish an opponent's ward by denying them city services. Cutting back on services in black wards on the city's west and south side has become a habit with the machine bosses. Thus Rahm's single-digit approval rating in the city's African-American community.

Now Rahm is using the same tactic to punish members of the Progressive Caucus.

And that was also the theme behind the mayor's budget -- feed the wealthy downtown neighborhoods at the expense of the resource-starved ones. Scott was right-on in voting no and had the guts to do it in the face of adversity and Rahm's threats to punish him at election time.

But Becky Carrol's flier is the work of a rank amateur. It never even mentions Doody-Jones (can't really blame 'em for that). So readers aren't told who to vote for. We only see a picture of Scott with his name emblazoned in the headline. It reminds me of the kind of silly crap we used to get every day in the mail from the disastrous Toni Berrios campaign when she lost her state rep race to progressive Will Guzzardi despite the machine (Madigan and machine boss, "Big Daddy" Berrios) spending a ton of money on junk mailers that usually ended up in voters hallway trash cans and never even made it into the house.

I can't imagine that the good folks in our ward will fall for this crap.