Look what they've done to the GED. Aligned with Common Core and handed over to Pearson 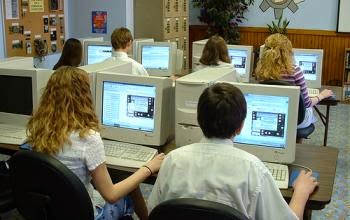 Back in the '80s I got my start in adult education, teaching GED classes in a little classroom in the back of the public library on North and Pulaski. My students were mostly dropouts from Clemente, looking to finish high school so they could go to a community college or apply for a decent job. Most were good students, capable, thoughtful and curious. Many had dropped out because of the gang situation at Clemente or for personal reasons -- they needed to work to support their families.

The curriculum was geared to the test and involved mainly basic math and literacy. But I did my best to get to know my students and learn as much as possible about their previous schooling and out-of-school learning experiences. We managed to turn the classes into much more than an exercise in test preparation and most of my students passed the test and got excited again about learning.

Now I'm hearing that the GED exam has been overhauled, aligned with the Common Core and handed over to Pearson, the giant British testing and textbook corporation in order to supposedly prepare students for 21st-Century jobs. The new test is now much harder. The test prep classes are given on-line. No more personalization. It's also become much more expensive in order to build in a big profit margin for Pearson, making it less accessible to the kinds of students I was teaching back in the day. The changes have caused thousands to drop out and give up.

NPR reports there's been sizable decrease in  the number of people who took and passed the test, according to local and state educators and the organization that runs it. In addition, at least 16 states have begun offering or plan to offer new, alternative tests.

What effect did all of these changes have on test takers?


"Our number of graduates for this last calendar year has dropped about 85 percent," says Myles Newman, who helps coordinate GED preparation for one school district in Lexington County, S.C. States including Wisconsin, Pennsylvania and Colorado are reporting large drops as well.

"Teachers are telling us that the new test is virtually impossible for students to pass," says David Spring, who with his wife, Elizabeth Hanson, runs the website Restore GED Fairness in Washington state. Both are educators who have spent years helping people prepare for the GED.

What a disaster!
Posted by Mike Klonsky at 9:10 AM