I made the 7-hour drive back from Kenyon just in time to make it to class yesterday. The contrast between this pastoral Ohio campus and Chicago's urban school battlefield was never more striking. At Kenyon I helped advise students on their final projects. One of them, bound for a great teaching career (I hope) worked with 4th-grade public schools students in nearby Mt. Vernon, who wrote plays that were put on before a packed house at the college.

All power to the imagination and performance-based assessment rather than high-stakes standardized testing. 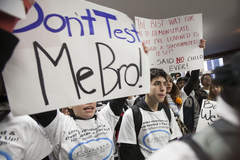 Back in the city, Chicago high school students are learning to find their voice the hard way. Hundreds of them boycotted the tests yesterday and marched at Board headquarters to protest the mass closing of schools in the city's black community. The protest was organized by two groups of students, Voices of Youth, and Chicago Students Organizing to Save our Schools.

The student protests come on the same day that hundreds of the city’s mostly young service industry employees went on strike for higher wages, with some students joining the service workers as they rallied.

At one point, students were kicked out of the district lobby by security officials who said they had failed to register to speak at the school board meeting Wednesday.

The not surprising response from schools CEO Byrd-Bennett:


“The only place that students should be during the school day is in the classroom with their teachers getting the education they need to be successful in life.”

This from the mayor's hand-picked top bureaucrat, brought into town to shut down those very classrooms and impose the testing regimen that's driving the protests. It was clear that the boycotting students were learning more about the workings of democracy than they ever could sitting in classrooms filling in the bubbles on the test.

Speaking of Wednesday's board meeting, its worth noting that there was actually a no-vote cast  as Carlos Azcoitia  became the lone voice against the expansion of charter schools in the face of the closing of 54 community schools. Thank you Carlos, one of the few real educators on the board of corporate yes men.