At City Hall this morning [Updated]

The press conference was a great success. One after another, parents from RYH and Blocks Together, came forward and gave compelling personal accounts of the harmful affects of Rahm's school closings. Then  Federico Waitoller and Stephanie Farmer from CReATE exposed the lack of any educational research base behind the closings. 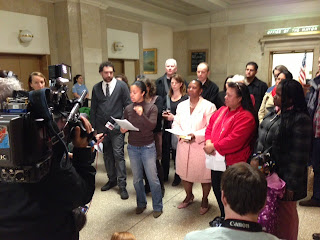 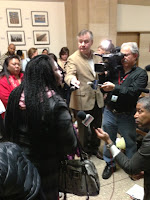 I'm heading down to City Hall this morning for a 9:30 press conference outside the mayor's office. Wendy Katten from the Raise Your Hand Coalition and representatives from the research group CReATE will be releasing their latest reports on Chicago's mass school closings and urging Rahm's hand-picked Board of Education to back off the closings.

They and the mayor would do well to listen. But it's not likely. Rahm has made it clear that he's done negotiating (when did he ever begin?) and that he plans to march straight ahead with his ill-conceived, dangerous, and poorly researched plan.

The real impact of the closings has been greatly underestimated. The media continues to use 30,000 as the number of students likely to be affected by the closing of 54 CPS schools. But if you count the students at the so-called welcoming schools, who will face severe overcrowding, bigger class sizes and potential safety risks, that number could nearly double.

Among those most severely affected will be thousands of special education students and their families. The closings are likely to batter their IEPs in violation of federal law, and disrupt ties to in-place programs and relationships. Look for federal suits to start flowing in May.

I imagine even more suits being filed around the violation of civil rights and equal protection since the closing plan, the largest ever in the nation's history, targets schools in the black community almost exclusively. The prospect of more boarded-up school buildings, loss of jobs and more neighborhood blight while Rahm's so-called Infrastructure Trust funnels millions more public and private investment dollars into downtown and lakefront projects, is the stuff of which rebellions are made.

It has become near impossible to raise issues of racial discrimination in the public discourse. Those, like CTU leader Karen Lewis, who dare to mention the R word, have been branded by dutiful local columnists like Zorn, Mitchell, and Washington,  and editorial boards, as "bomb throwers" and "conspiracy theorists."

NPR reports that the U.S. Department of Education is already looking into whether recent school closures in Detroit and other cities have disproportionately hurt black and Latino students. Let's see what these supposedly liberal columnists have to say when the civil rights suits hit the federal courts.

I'm thinking, maybe we should revert to double-speak and drop any mention of race or racism. Education writer Sam Chaltain refers to "the wrenching, culturally complex decision to close 54 public schools in Chicago."

Yes, culturally complex. That's what I meant to say.
Posted by Mike Klonsky at 6:58 AM