'Rowdy' Rauner and the 'Rahminator' are steamin' mad 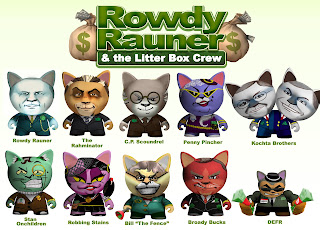 The nerve! Doesn't the CTU know that you never mock the rich and  powerful? Billionaire fat cats like Bruce "Rowdy" Rauner, Robin "Robbing" Stains and Penny "Pincher" Pritzker, just don't like it. And even  "Rahminator" Rahm, who is already the target of so much public abuse by his own patrons, is so mad, he's spitting milk all over his whiskers.

Yes, the union's gone and done it. They've posted a 5-minute video of a scary bedtime story, “Stand Up to the Fat Cats,” accusing the mayor and cronies like Rauner and Pritzker of privatizing public education. Shocking!

Rauner says he doesn't like being "lectured by a leader of a failed union."  Union leaders "are a joke, just not a funny one," says "Rowdy". Sounds like he's still fuming over the victorious CTU strike which put a serious crimp in his corporate-style school reform.

Rahm's liar-in-chief Becky Carroll leaps to defend her boss as only she can:


“These kind of mean-spirited tactics have no place in our school system as they do absolutely nothing to help kids or support their learning,”

Carroll on the other hand, thinks that closing hundreds of neighborhood schools and turning them over to private charter operators, destabilizing the lives of thousands of black and Latino children, taking away teachers collective-bargaining rights -- all that is right in tune with the holiday spirit.

The much smarter spokeswomen for Steans and Stand for Children declined to comment.
Posted by Mike Klonsky at 6:21 AM