NASSAU, BAHAMAS-- On winter break. We couldn't pass up a chance, between family visits in Florida, to grab a cheap fare from Miami over to Nassau for a couple of days of R&R. It's nice to be able to escape the Chicago winter for a few days but I've still got my mind on Chicago schools, especially after reading the Sun-Times story about yesterday's student sit-in at King College Prep, where 500 students demanded the firing of principal Shontae Higginbottom.

King students are angered over Higginbottom's imposition of key changes this fall, including closing the new media center where students used computers after school, and locking students outdoors after they’ve left the building during the day.


“I want the rules to change,” sophomore Joshua Phillips said. “And if things can’t change, I guess it’s time for a new principal.”

Back to Nassau where we were lucky enough to take part in yesterday's Junior Junkanoo festivities, a prelude to the Christmas holiday Junkanoo which looks like a mix between Mardi Gras and festival time in Rio. No one here is quite sure about the origins of Junkanoo but it may have West African origins as the costumes and conduct of the masqueraders bear similarities with the Yoruba festivals. I read that this festival began during the 16th and 17th centuries when slaves in The Bahamas were given a special holiday around Christmas time, when they would be able to leave the plantations to be with their family and celebrate the holidays with African dance, music and costumes.

Today, despite it's heavy corporate sponsorship,  Junkanoo marchers satirize politicians and social issues through costume and Junkanoo music and art.

The streets are filled with locals and tourists from the huge tour boats. Food stands compete for prizes for best conch salad, ribs or jerk chicken while thousands of Bahamian school students take to the streets in dazzling costumes and masks and march down Bay Street to steady rhythms and applause from the huge crowd of onlookers that lasted past midnight.

Among the hundreds of predominantly-black public schools marching last night, was an apparently all-white group from the nearby Spanish Wells All-Age School on tiny St. George's Cay. Spanish Wells, it seems, was settled by a mix of Bermudan pirates and British loyalists (who brought their slaves with them) fleeing the American Revolution. 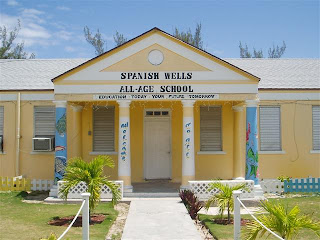 Where's the connection here? Well, check out the rules for Spanish Wells students:


1. Be neat and tidy in your dress. Your appearance says a lot about you.
2. Litter makes your surroundings unsightly. Put it where it belongs.
3. Obey orders right away. You might be giving them someday.
4. Be courteous, kind and respectful to all.
5. Never leave the school premises without permission.
6. Show enthusiasm, pride and perseverance in all that you do.
7. Be on your best behaviour at all times.
8. Wear only the prescribed school uniform and accessories.
9. Stealing, fighting, and cursing are bad habits. Do not engage in these.

I guess no matter what country you're in, you can tell the class character of the schools by the hidden curriculum. For working class kids its almost always about rule #3.

The King student protest kindles hope that critical thinking and democratic ideas are still alive, even in the most oppressive schools.