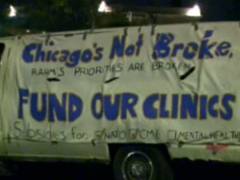 More arrests this afternoon at the Chicago Health Dept. as protests continue over the mayor's closing of half the city's mental health clinics.  Word is that another patient just died, allegedly due, directly or indirectly to the closing of their clinic. Some patients, with few means of transportation, have to travel 10 miles or more across town to get treatment.

In what's proving to be one of the biggest lies ever told by a politician, Rahm and the Dept. of Health bureaucrats continue to claim that closing neighborhood health clinics is "good for patients" and that "every City client has a personalized transition plan and is being monitored closely..."

Side note: AFT Prez. Randi Weingarten came to Chicago a few weeks ago to march with 8,000 teachers. She gave a fine speech at the giant CTU support rally.  As readers might recall, I gave her her props for that. However, she was back in town again last week speaking on a panel at Clinton's Global Initiative and in support of Rahm's opaque "Infrastructure Trust" (one of the great misuses of the word Trust, ever), which will supposedly bring thousands of jobs to the city.  What it will more likely do is line the pockets of a handful of Rahm's billionaire patrons and give the mayor an unregulated slush fund to use for his own political advantage. No city program has been rushed through the City Council without careful review since the great parking meter heist during the Daley administration.

“People want to work,” Weingarten said. “And what we’re seeing, whether it’s the mayor’s infrastructure program here in Chicago or everything else we’re doing around the country, is that when labor and business start working good together on trying to put people back to work with good jobs, when we start building things again, it builds huge hope around the country.”

Weingarten could perhaps be forgiven for jumping on the IT bandwagon, along with nearly all of this town's other union officials. Clinton is rallying the party behind Rahm and the project. The Mayor even put Jorge Ramirez, president of the Chicago Federation of Labor, on the board of the Trust. The promise of jobs, no matter how illusory, is pretty enticing.

But in the middle of CTU's difficult contract negotiations, and with Emanuel never missing an opportunity to attack the teachers and sabotage their strike vote; indeed with the union's very existence on the line, Weingarten failed to even mention anything  about the city's priorities -- i.e., keeping schools and mental health facilities running -- or to put pressure on the Mayor even while hailing Caesar. Tactical compromise is one thing. But compromise can't mean no struggle.

WLS Radio's Bill Cameron put it best: "Looking at these two, you would never guess her Chicago affiliate is at war with his school system."