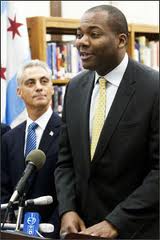 "We in many ways were lying to parents and to kids about proficiency." -- J.C. Brizard

This morning, hundreds of union teachers and their community supporters are packing the CPS board meeting to protest the board's failed reform policies. With a teachers' strike looming and public opinion continuing to turn against the mayor, Chicago schools CEO J.C. Brizard is trying to shift blame for current failures onto the previous regime.

Here he tells ABC7 political reporter Charles Thomas that "he spent much of his first year in Chicago looking at test scores," before he reached a disturbing conclusion about the school district he had signed on to lead. Then he turns on his predecessors, calling Arne Duncan's reform plan "incoherent."


"What I found was a reform effort that was somewhat fragmented," said Brizard.

Recall that at the time, the Daley/Duncan reform was hailed as a Chicago schools "renaissance" and a "turnaround miracle," which led to Duncan's elevation to become Obama's education chief.

In another startling unsolicited confession, Brizard admits"lying to parents and to kids about proficiency."


"We have kids that are graduating out of elementary school going to high school being told they're proficient and they're not."

As Rahm forces his longer school day on a resistant school community, Brizard says he replaced over a third of the district's 675 principals, with more to come. But Brizard's reform-through-firing and school closing/turnaround approach is no different from that of  Duncan's.

Thomas goes on to report that Brizard "denied being the puppet of Mayor Emanuel." But, Thomas recalls, Mayor Emanuel did not allow the newly appointed CEO of the Chicago Public Schools to speak at his introductory news conference.

Of course that's exactly what Brizard is -- the mayor's hand picked front man, who along with a hand-picked, corporate and billionaire-loaded board, which votes unanimously at Rahm's signal on every issue, have turned CPS into a wing of City Hall.

But all the spinning and blaming has only led to growing disenchantment in the community and growing support for the teachers and the CTU. And now that anger is being expressed in the form of a parent/community-based petition drive to end mayoral control and replace it with an elected school board.

Those interested in taking part can join the Teachers 4 Parents petitioning drive today at 6 p.m. at the monument in Logan Square.