Conservative NYT columnist Brooks has it all figured out. You don't really help suffering people in Haiti or Harlem by "throwing money" at them. The Haitians' problem is, they're irresponsible and they have a different religion, says Brooks:

There is the influence of the voodoo religion, which spreads the message that life is capricious and planning futile. There are high levels of social mistrust. Responsibility is often not internalized.

As for black folks in Harlem, we just need to get rid of their culture and replace it with "a culture of achievement." Here's Brooks' "intrusive paternalism" solution to poverty there:

...the Harlem Children’s Zone and the No Excuses schools, are led by people who figure they don’t understand all the factors that have contributed to poverty, but they don’t care. They are going to replace parts of the local culture with a highly demanding, highly intensive culture of achievement — involving everything from new child-rearing practices to stricter schools to better job performance. 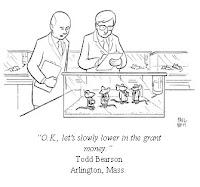 Why we swallow Race To The Top

Nevada’s school superintendent, Keith W. Rheault, said in an interview that some Nevada educators had initially grumbled about the federal program but had fallen silent as the state’s tax revenues plummeted last year.

When you’re starving and somebody puts food in your mouth, it’s amazing what states will do,” Mr. Rheault said. (NYT)