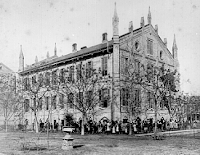 If you follow developments in post-Katrina New Orleans, as I do, you will come upon reports from schools with names like McDonough 15 or McDonough 32. Why do all these public schools carry the name, McDonough? Because they were built with funds from the estate of slave owner John McDonough and 38 bore his name. McDonough was a wealthy commission merchant, planter, and real estate speculator who died in 1850 and left most of his estate to the cities of New Orleans and Baltimore for education purposes. New Orleans administrators established the first McDonogh School in the antebellum period and McDonough Schools two through six during Reconstruction. Several have had their names changed under pressure from the black community.

The Chicago Freedom School (CFS) is not a school in the traditional sense, but a summer program designed to equip participating Chicago high school students – also known as Freedom Fellows – with the tools needed to implement change in their communities. (Chi-Town Daily News)

The mayor is in Denver armed with impressive power-points and videos, plugging Chi-Town as the best home for the 2016 Olympic Games. But I'll bet none of his fly-over videos show the 800 parents and community folks packed into Wednesday's board meeting, protesting Renaissance 2010 school closings. Luckily, he also doesn't have to show existing indoor running tracks in CPS schools. There are none. And I'm sure his power-point doesn't mention the 29th CPS student killed by gun violence so far, this school year. He claims he can raise $5 billion from private sources to pay for the games. But he doesn't say how or how much will come from the "rainy day fund" of guaranteed public dollars. However, he is promising that Olympians will never have to risk any parts of the city except a newly constructed enclave in Daley's own backyard lakefront compound.

One of the videos offered a "flyover" of the city and the Olympic Games sites. The animated version of the city was idyllic: no graffiti on buildings and no traffic jams...As part of their presentation, Chicago officials stressed that while Chicago is a big city, the Olympic Games and housing would be contained, for the most part, to a small village along the lakefront. (Sun-Times)