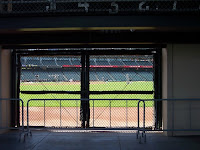 Here’s neocon George Will’s latest. He adores (his version of) Arne Duncan and embellishes the myth of the Chicago “miracle” where, “by closing failing schools and opening replacements, Chicago is ensuring that the portfolio of schools is churned and improved.”

Here’s my favorite Will line:

By making teaching more fun, his Chicago innovations helped increase the number of applicants from two for each teaching position to 10.

Some fun, these school closings! But Will is quick to recognize that in Chicago, Duncan “had a hammer—the support of His Honor, Mayor Richard Daley.” Will and Duncan also make clear that they have no use for colleges of education or experienced teachers.

And rather than focus on catching Osama bin Laden, to use another phrase, they didn‘t let a good crisis go to waste. And they used the atmosphere of crisis after 9/11 for all kinds of aggregation of power—accumulating power in the executive and really within the vice president‘s office in a way that we haven‘t seen outside of declared wartime and even there, with more strictures than were the case here.