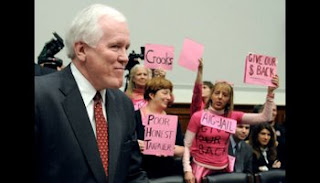 Liddy has a seat on the Civic Committee

Well, it seems that billionaire philanthropist Eli Broad isn't the only "school reformer" with AIG connections. How about Eden Martin, president of the Civic Committee of the Commercial Club of Chicago, and one of the architects of Mayor Daley's Renaissance 2010 school-closing/privatization initiative.

We learn today that AIG's CEO Edward Liddy actually has a seat on the Civic Committee. In today's Sun-Times, Martin, who's been the most outspoken opponent of teacher collective-bargaining rights, heaps praise on Liddy and obviously likes AIG's business model of performance bonuses (merit pay) so much he's trying, with some success, to force it on Chicago's public schools.

It's not just Chicago. An interesting side-bar to the Sun-Times story is Liddy's connection with post-Katrina New Orleans:

Liddy knows controversy, since he oversaw a Sears Roebuck and Co. restructuring and led Allstate during its tough times in the post-Katrina hurricane period.